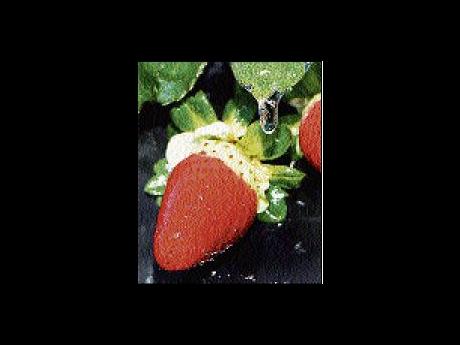 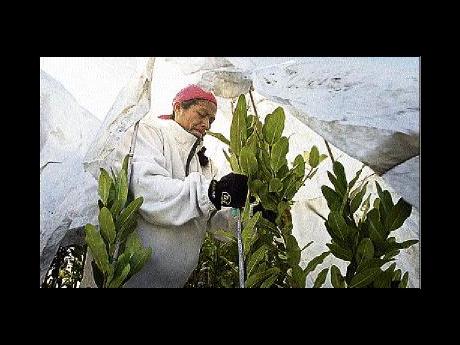 LEFT: Icicles cling to strawberry plants just after sunrise Monday in Plant City, Florida. Farmers spray water on their crops to help protect the fruit. Temperatures overnight in the area dipped into the 30s.

RIGHT; Eulalia Pedro, a worker at Quintessence Nursery, covers cold-sensitive sub-tropical plants with frost cloth at the nursery in Loxahatchee, Florida, on Monday.

Snow, ice and wind wreaked havoc on energy markets Wednesday, where a barrel of oil topped US$83 a barrel for the first time since the fall of 2008.

Natural gas futures soared 6.0 per cent to US$5.971 at early afternoon.

After the weekly report from the Energy Information Administration surprised traders, benchmark crude on the New York Mercantile Exchange reversed direction and rose 92 cents to US$82.69 a barrel in early afternoon trading.

Dangerous temperatures knocked fruit from vines in Florida and made driving treacherous in New England.

A stubborn cold wave locked freezing temperatures in place across the central and eastern US Wednesday as far south as Florida, where farmers worked to salvage millions of dollars' worth of strawberries and other crops.

Arctic air was expected to hover through the weekend. In a rare turn for the US south, forecasters warned that snow and ice were possible Thursday from South Carolina to Louisiana and wind chills in the region could get down to near zero Fahrenheit (minus 18C) at night.

In central and south Florida, farmers attempted to salvage citrus and vegetable crops by spraying them in protective layers of ice and covering them in plastic.

Florida Governor Charlie Crist signed an executive order Wednesday that gave the state's Division of Emergency Management and other agencies the authority to provide farmers with assistance.

Weather in the South this time of year is typically chilly for just a day or two before temperatures rebound into the 50s (10-15C). Many homes were not built to handle such cold, with uninsulated pipes and heat pumps that must continuously run to keep things barely comfortable.

Weather easily trumped a surprise report Wednesday from the Energy Information Administration that showed the supply of crude and gasolene in storage is growing.

The amount of gas placed into storage last week was three times greater than what was expected by energy analysts polled by Platts, the energy information arm of McGraw-Hill Cos.

But it was dropping temperatures from Baltimore to Beijing that had energy prices moving. A big snowstorm hit Beijing Wednesday and freezing temperatures were expected to last there through the week.

In other Nymex trading in February contracts mid-afternoon, heating oil fell less than a penny to US$2.1891 a gallon because there are still enormous supplies available.