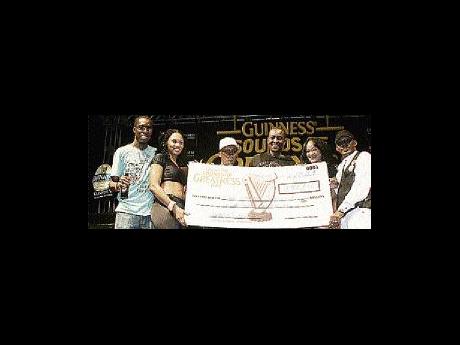 Contributed
Gareth Geddes (left), brand manager for Guinness, poses with members of Sound Trooper, including Ricky Trooper (right), after presenting them with a cheque at the Guinness Sounds of Greatness road show on Saturday, October 31, 2009.

So, it has come down to this: a sound system led by a veteran DJ, who claims his sole purpose in life is to 'kill' other sounds, will battle a sound system that made its name by doing just that - 'killing' other sounds - all for the title of 'greatest of sounds'.

Come Saturday night, Sound Trooper plays Bass Odyssey at Mas Camp on Oxford Road for all the marbles; bragging rights for a year, more than a million dollars in cash, and the coveted title of Guinness Sound of Greatness for 2009.

En route to the finals, the Spanish Town-based Sound Trooper despatched City Rock, Jamrock and Black Widdo with relative ease, with Ricky Trooper declaring that the vanquished didn't have the expertise or the experience to defeat his mighty sound system.

For their part, Bass Odyssey from Alexandria in St. Ann, swept aside the highly respected Coppershot, Flava Unit, and giant-killers Bredda Hype. The key to their success, owner Keith Walford said is that they never underestimated anyone because the rules of the competition levels the playing field significantly.

Guinness Brand's Gareth Geddes, at last October's launch of the competition, explained that songs selected for the clashes must be fit to be played on radio. He also said that language that incites violence or discriminates against any particular group of persons will be prohibited. And though, it was not the intention of the organisers to level the playing field, it worked out for the best.

"The main aim of the rules was keeping the competition clean, keeping it in line with our marketing code. We unearthed some good talent that pushed some of the other sounds all the way but, in the end, experience and popularity served (the finalists) in good stead," he said.

Ricky Trooper is eagerly anticipating this weekend's clash because playing Bass Odyssey in the finals is more than just about winning the competition.

"Mi no respec' Bass Odyssey. This clash is like a grudge thing," he said of this weekend's battle. Citing bad blood between himself and Bass Odyssey that has been brewing for more than a decade, Trooper said he has no intention of taking it easy on Saturday. "Me naw go ramp with Bass Odyssey, me just a go mash dem up."

He claims to have been taking it relatively easy throughout the competition thus far, but now that Sound Trooper will be on the big stage playing a seasoned rival, he plans to ramp up the intensity. "The bigger the opponent the bigger me play," he said. "Everything is going to be different; we are taking it to the ultimate notch. From start to finish we are going to deal with them wicked. This is a serious dance, no joke this."

Walford is unfazed by Ricky Trooper's bluster. "Ricky on Kilamanjaro was something you would be scared of because they had all those dub plates with Nitty Gritty and Super Cat, but Trooper by himself doesn't really frighten anybody," he said. "I can't remember him doing anything incredible on his own."

He states that he holds no grudge against Trooper even though he (Trooper) disrespected him on the Internet.

"We don't carry any bad blood but we don't like his approach," Walford said. "Those who know better do better."

Keeping details of his plans close to his chest, the Bass Odyssey owner said they are going to do what they have to do to ensure a victory come Saturday. "If there is something we need to do, we are going to do it to win," he said. "We are just going to prepare like we have always done."

Walford said they are anticipating a large crowd at Mas Camp, which he described as Trooper's backyard, but they remained undaunted. Trooper, he said, was afraid to clash with Bass Odyssey in Alexandria but unlike Trooper, they are prepared to clash at home and abroad.

Geddes is very pleased at the way the competition has unfolded. "We're definitely pleased. We went to more parishes, more venues, more people turned out," he said. "There were no violent incidents, and there has been a clean positive vibe so it has been good. We're now looking forward to a big final night on Saturday at Mas Camp."