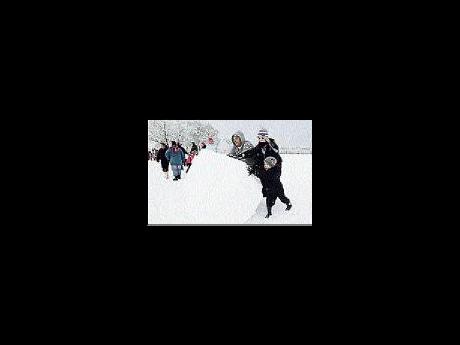 AP
People make a large snowball in Heaton Park in north Manchester after heavy snowfall across the north-west of England, on Tuesday.

Unusually heavy snowfall stranded hundreds of motorists, disrupted trains and shut down schools and airports across Britain yesterday as the country suffered through its longest cold snap in nearly 30 years.

Airports across the country were paralysed, with London's Gatwick and Stansted unable to operate and hundreds of flights cancelled. At Gatwick, where the only runway had been shut for snow clearance all day, more than 240 flights were cancelled. London Luton airport was closed until early afternoon. A dozen flights were also cancelled at London's Heathrow airport, Europe's busiest, with long lines building at check-in desks.

The foul weather also badly hit Britain's road network. Sections of the country's most important highways, including the M1, which links London and Leeds were closed; and the military was called in overnight to help rescue motorists, when up to 1,000 vehicles were caught in a snow-related traffic jam in Hamp-shire, in southern England. Many people were evacuated to nearby rescue centres, but some slept in their vehicles overnight.

Re workershe demands on rescue workers in southern England were so overwhelming that coast guard workers turned their skills from sea to land to help out. Train services were also affected, with lines in southern England reporting reduced services. Eurostar, whose service through the Channel Tunnel was frozen for days by snow-related problems in the run-up to Christmas, said it cancelled four services yesterday due to the weather. Nationwide, thousands of schools closed down.