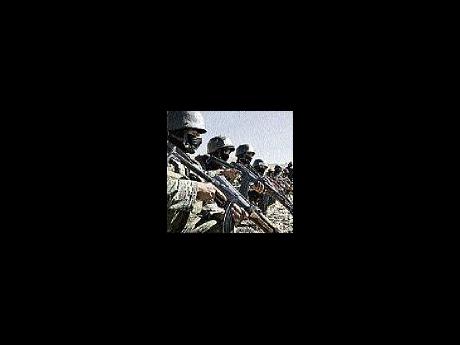 An anti-terrorist unit from the Central Security Forces of the Ministry of Interior trains in the Sarif area on the eastern outskirts of the capital San'a, in Yemen, yesterday.

Yemeni security forces arrested three suspected al-Qaida militants from a cell that the United States (US) has said was linked to a plot against the American or other embassies, the Interior Ministry disclosed yesterday.

The arrests were the latest move in Yemen's US-backed crackdown on al-Qaida's offshoot here, as Yemeni officials trumpet that they are taking on the militant group.

The US and British embassies closed for two days this week because of a threat that al-Qaida was planning an attack. Other Western embassies also took security precautions, closing to the public or limiting access.

The two missions reopened on Tuesday, after the US said an assault by Yemeni security forces on an al-Qaida cell northeast of the capital a day earlier had "addressed" the threat.

In those clashes, Yemeni forces attacked a group of al-Qaida fighters moving in the mountains in the Arhab region. The troops were aiming to capture al-Qaida's suspected leader in the area, Mohammed Ahmed al-Hanaq, and a relative Nazeeh al-Hanaq, the ministry said.

They escaped, but two fighters with them were killed and several others were wounded. On Tuesday, security forces captured three of the wounded militants while they were being treated at a hospital in Reyda, a region north-west of the capital, San'a, the ministry said. Also arrested were four people suspected of transporting the militants to the hospital and hiding them there, it said. No identities were given for the captured militants.