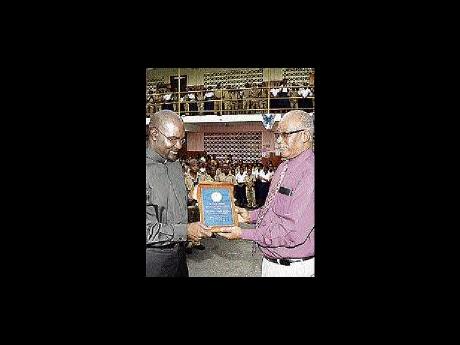 Ian Allen/Photographer
Cosmo Grant (right) chairman of the board of the Holy Family Primary School, presents a plaque to Father Michael Davidson at the school on Tuesday, during a special devotion service, to recognise his achievements.
Nadisha Hunter, Gleaner Writer

HOLY FAMILY Primary on Tuesday hailed past student Michael Davidson, who despite the challenges of growing up in a tough inner-city community, remained focused and was ordained a Catholic priest in December last year.

Davidson who grew up in Southside, central Kingston was determined not to be sidetracked by any negative influence he encountered.

"I feel humbled as it is something that I have been preparing for over the past twelve years and I feel it will not only give me an opportunity to serve the church but also the community," Davidson said yesterday as he commented on his work as a priest.

The 39-year-old scholar who is currently pursuing a Master in Education Administration degree at Boston College, USA, pledged to make a difference in the lives of the inner-city youth.

"I see my role as helping these kids who sometimes feel society has rejected them so when I return to Jamaica, I will be definitely taking that on," he pledged.

Speaking at a devotion service at the institution that was specially convened to salute him, the priest encouraged the students to look beyond their challenges when seeking a career.

Davidson grew up in a poor family structure with numerous financial challenges, which he partly attributed to the death of his father who he said lived a gangster life in the community.

"Although my father was the ruler of the community I never see that life as the acceptable one for me, as I don't believe that is the way that they should go," he noted.

"I don't believe one person in central Kingston was born with a gun and I believe that they can make it with very minimal means just as I have done," he said.

The Catholic priest said he listened to teachers at the institution who took the time out to keep him on track in his lessons.

But despite this he was unsuccessful in the Common Entrance Examination and was placed at the Holy Trinity High school in Kingston.

Keeping focused with a single goal in mind of pursuing studies in education, Davidson said he continued his journey and was successful in five CSEC subjects. With this, he moved on to St George's College in Kingston, an institution he had dreamt of attending, but this time as a dean of discipline.

"There is a light in every tunnel and I am asking persons to give the inner-city children a chance as they can shine," he pleaded.

The school, located on Law Street, central Kingston is known for turning out top achievers and has now gained recognition as an inner-city institution which has produced two Catholic priests.

The first was Monsignor Michael Lewis who now serves at the Stella Maris chapel.

Principal of the institution Cecille Palmer, said the school had a rich heritage which it had worked hard to build on.

"Holy family can only grow from strength to strength and I know when I leave it will continue the good work," the principal said.

She praised Davidson for his achievement, saying he has made the school proud.

Palmer added that the community has also contributed to the growth of the school over the years.