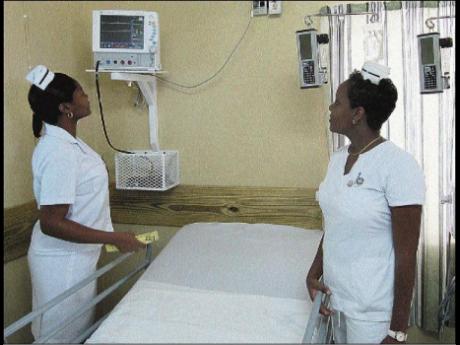 AN AMERICAN-based nursing group that is in the island to observe Jamaica's health services has high praises for local health professionals, despite the challenges of inadequate equipment in some public health facilities.

Professor Linda Smith of Winona University in Minnesota, United States, who is in the island with several nursing students, says after much observation at a number of health institutions the group was impressed with the quality service offered to the patients.

"I think the nurses are doing a fabulous job with the little resources that they have and I am always impressed with their knowledge, creativity and the care that they give to their patients," she told The Gleaner at King's House on Tuesday.

Smith commented on the immunization system in Jamaica saying it had a higher rate than the US.

"When we visited the clinics, we find that the Public Health Nurses really know the residents in the communities who use the clinic and so if the children don't get immunization they will take it to them, so you have a much higher rate of immunization here," Smith noted.

She said while there were drawbacks with the government's no- user-fee policy, such as overcrowding and excessive strain on the economy of the country, there were positives that should be commended.

"There are good things that come out of it as no one is deprived of health care but there are aspects of it that needed to be reviewed," she added.

The professor further said the eight-year experience of visiting Jamaica yearly had helped to mould her nursing career.

"I really like their team spirit and it is really inspiring to see how they do well with the little resources," said Erica Stevermer, a student nurse noted when speaking about the health officials.

"I am gracious for the visit because I have learnt about different aspects of health care in Jamaica and I am sure this is something that I will put into practice in my nursing career," she added.

The governor general, who formally welcomed the group to the country, said the occasion was designed to greet the Americans and to give them an understanding of life in Jamaica.

This is the thirteenth consecutive year that students from the university visited Jamaica to tour its health sector.