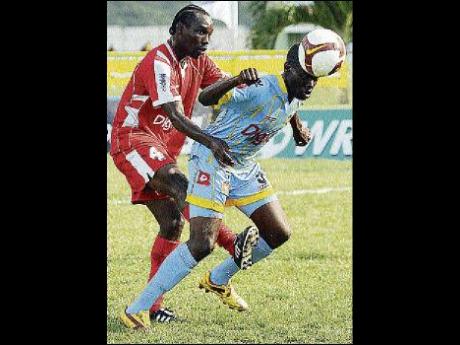 A 45th-minute strike from Kemar Cockburn gave bottom-place August Town a shocking 1-0 victory over form team Waterhouse, in their Digicel Premier League encounter at the University of the West Indies (UWI) Bowl yesterday.

With one game remaining in the round, Waterhouse lead the second round standings with 23 points, five ahead of Boys' Town (18) and six ahead of Harbour View (17), which lost 0-1 to Village United in yesterday's late game at Harbour View Mini Stadium.

Waterhouse dominated the early proceedings and should have taken the lead in the 15th minute when Kenardo Forbes outsprinted three defenders to the ball. But with goalkeeper Devon Haughton at his mercy, he took a weak effort that went wide of the target.

The visitors were made to pay for their wayward finishing on the stroke of half-time, when Cockburn rose above two defenders to head home a corner kick from Daniel Shaw past custodian Richard McCallum.

Both teams created a number a clear-cut chances in the second period, but faulty shooting from the strikers let them down.

Kevin Lamey, Forbes and Jerry Walters missed for Waterhouse, while Mervin Miller, Cockburn and Shaw were guilty of missing for August Town.

Paul Young, the coach of August Town, was proud of his team.

"This was a total team effort because the players worked hard and they stuck to the game plan and I am very proud of them," said Young.

"This win will certainly help our players' confidence a lot because we put in some new rules and they are adapting to it and I believe that things can only get better for us now," Young added.

Geoffrey Maxwell, coach of Waterhouse, who were suffering their first defeat since a 0-1 first round loss to Boys' Town on November 4, was displeased with his team's efforts.

"It was a very disappointing performance from us because I am looking at the bigger picture," Maxwell said.

Maxwell added: "I think we played very poorly today, but I am not taking anything away from August Town because they played a good game."