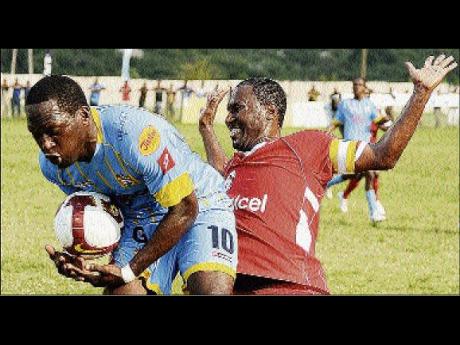 The game, which kicked off with both teams having a chance of making the second End-of-Round final, ended with Sporting's aspirations being dashed, while Boys' Town have to wait until the final round of matches and pray for Harbour View to falter along the way.

The game got off to an explosive start with Sporting carving out the first of their 14 chances, in the opening minute.

Damarly Samuels made a square from the left flank which rolled along the ground, eluding the Boys' Town defenders and keeper in the process. It was hit one time by Oneke Ford who was unmarked on the back post but his effort from six yards out sailed over the empty goal.

Boys' Town captain Michael Campbell delivered a corner that fell to the feet of Boys' Town's leading goalscorer, Peter Keyes, but his snap shot from close range was well saved by André Blake.

The second half got off to as sprightly a start as the first, with Boys' Town going on the attack through George Vernal, who picked up a ball on the edge of Sporting's 18 yards box before unleashing a powerful left-footer. But Blake was yet again up to the task, diving full stretch to his left to tip around the post.

Price said: "The same script every week; numerous chances, no conversion. These are the types of games that you have to win consecutively if you want to challenge for the premier league title."

He was, however, not overly concerned about missing out on the second End-of-Round final.

Boys' Town moved to 18 second-round points and 34 overall. Waterhouse have already qualified with 23 points (36 overall). Harbour View and Tivoli Gardens, which had 17 points ahead of their respective late matches against Village United and Rivoli United; and St Georges (17), also have a chance.

Nigel Stewart, coach of Sporting Central Academy, was pleased with his team's performance.

"I think the team played well today. We got chances and we never put them away but away from home and we get a point; I think we are satisfied with that," Stewart said.

"We have been playing well and enjoying the second round so we are going to work on our finishing and try and keep the momentum going."