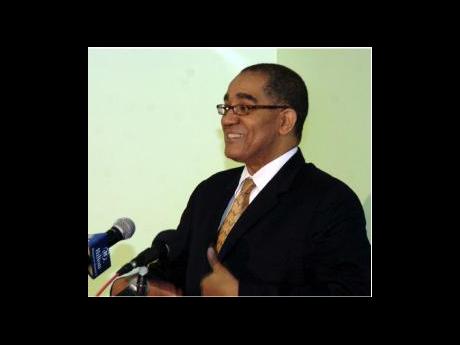 Jamaica's central bank Governor Brian Wynter is confident the economic doubts that caused the domestic financial market to reject recent government bond offers will be lifted, removing the need for continued Bank of Jamaica (BOJ) lending, except in the most extreme circumstances.

"What has been troubling will soon be removed," Wynter said at a briefing Wednesday, his first since being hurriedly parachuted into the job six weeks ago after the dramatic sacking of his predecessor, Derrick Latibeaudiere.

At the same time, Wynter rejected that the BOJ's outlay of $23 billion to the government since November - via advances and purchase of debt securities - was not the classic inflationary pumping of unbacked cash into the economy and, therefore, ought "not to be characterised as printing money", a charge levelled by former Finance Minister Dr Omar Davies.

Such short-term cover, Wynter argued, was normal, and were not troublesome if the parametres for their occasional use were strictly adhered to.

Wynter's confidence for a change of mood by domestic lenders is premised on his view that they will be buoyed up by the government's medium-term economic programme that will support its application for a loan of nearly US$1.3 billion from the International Monetary Fund (IMF) under a three-year stand-by agreement.

The BOJ governor told journa-lists that all major issues on the IMF programme "have been resolved", while at a separate briefing, the Finance Minister Audley Shaw said a letter of intent that is to go to the fund had been finalised and would be reviewed by ministers at a Cabinet retreat this weekend.

However, market confidence has been shaken by several missed deadlines from Prime Minister Bruce Golding and Minister Shaw for completing an agreement with the fund, as well as the perceived mishandling of the government's fiscal policy during the current fiscal year, including the bungling of the imposition of a $21.8 billion in December - the size of which, Wynter felt, underlined Jamaica's commitment to an adjustment programme.

Faced with a shortfall of $17.9 billion in projected tax and other revenues for the first eight months of the fiscal year and needing to pay bills, the administration, in November, turned to the BOJ for an advance of $5.1 billion, half of which was repaid and the remainder conver-ted to securities.

When, last month, the institutions, despite being highly liquid, took up a mere five per cent of the finance ministry's bond offer, the central bank stepped in and purchased $18 billion.

That happened at a time when BOJ was moving to lower the rate on its benchmark 180 certificates of deposit by two percentage points to 15 per cent, on the basis of a slow down in inflation and the relative stability of the Jamaican dollar.

Wynter stressed that the decision of institutions to reject the offers was not an issue of price. "It was a matter of confidence," he said.

He added: "That uncertainty has to be addressed."

Even as Shaw, at his own briefing, was hinting that he might have to again call on the BOJ for help to shore up the government's financing gap, Wynter was telling journalists that "I am not expecting to continue to provide the resources" to cover budgetary shortfalls.

"I am working with the government", Wynter said, on mechanisms that "will facilitate the financing of themselves in the interim".

But should the market continue to be skittish over government offers? "We will cross that bridge when we get there," said the new governor.