Farmers to get more training 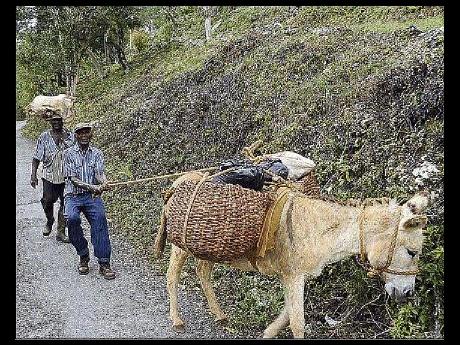 Farmers on their way home recently from a day in the field in Alderton, St Ann. - Ian Allen/Photographer

The centre was launched in March 2009 at Bodles Research Centre in Old Harbour, St Catherine.

Dr Tufton said that CEATA was established to coordinate the relevant agencies in Jamaica and the region to develop practical research in agriculture.

He added: "The establishment of the centre will not only benefit Jamaica, but the region on a whole. It is a commitment that is open to CARICOM countries within the region."

On Wednesday, the government of Spain provided a grant of $34.9 million for the Centre of Excellence.

The official signing of a cheque for the amount was done at the Ministry of Agriculture. Dr Tufton and Ambassador of the Kingdom of Spain Jesús Silva Fernandez participated in the ceremony.

According to Dr Tufton, the money would be used to construct two greenhouses and to train extension officers and farmers in improving their methods of production.

The centre will be managed by a 15-member advisory board drawn from various local, regional and international institutions. They include: The College of Agricul-tural Science & Education (CASE); University of the West Indies (UWI), the Caribbean Agricultural Research & Develop-ment Institute (CARDI) and the Food and Agriculture Organisation (FAO) of the United Nations.

The agriculture minister said CEATA would be more attractive to younger farmers, as it would assist them to build a career from agriculture.

Dr Tufton said he hoped an increasing number of persons would see agriculture as an investment.

In his response, Fernandez said that it was very important to invest in the agricultural sector of a country.

"I think it is a very good project that will help to improve not only Jamaica, but to improve the region on a whole, as farmers will be trained. The project is getting more and more sophisticated as stakeholders are willing to come on board to work closer to develop the agricultural sector in Jamaica," he said. He added: "This cheque is the first that will be given to offset the project and, in a few months, another cheque will be made available once we see the results."