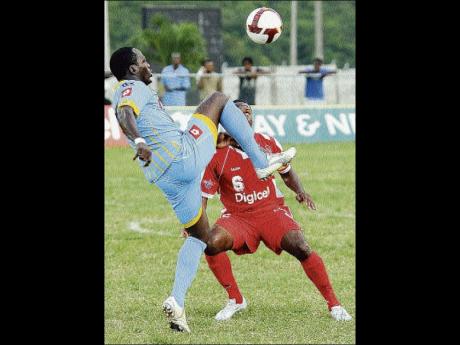 "The inclusion of these schoolboys has certainly helped our team a lot because they gave a wonderful performance against Arnett Gardens last Sunday, and they also did the same tonight," said Davis. "They are young and their names are being called and so I think that they are the ones who should be playing for us."

Davis added: "Allan Ottey (St James High schoolboy) has been playing well for us along with Dino (Williams), who scored a beautiful goal for us tonight."

The 19-year-old Williams gave the visitors the lead when he fired home a curling 20-yard free kick past goalkeeper Dwayne Miller at his near post.

Despite their victory, the Villagers remain second from bottom in the standings with 19 points. August Town also have 19 but with an inferior goal difference.

Davis noted that this victory would definitely help to boost his players' confidence ahead of the remaining matches.

"This will certainly be a motivational factor for the players because they want to win and they are trying their best," Davis reasoned.

Donovan Hayles, coach of Harbour View, said his team failed to play according to his instructions. The defeat undermined his team's chances of making the second end-of-round final. With one round of matches remaining Harbour View remain on 17 points, six below qualifiers Waterhouse (23) and one behind second-place Boys' Town (18).

"I am very disappointed with the result but, as you notice, we had to make a number of changes to our starting line-up because of many reasons which I won't discuss," said Hayles.

"The team didn't play with any coordination and I believe that this was a result of the changes that we made," Hayles said.

Hayles added that all of his senior players will be available for Sunday's final game in the round against Arnett Gardens. "I am confident that you will ssee a different Harbour team on the field against Arnett on Sunday," he said.