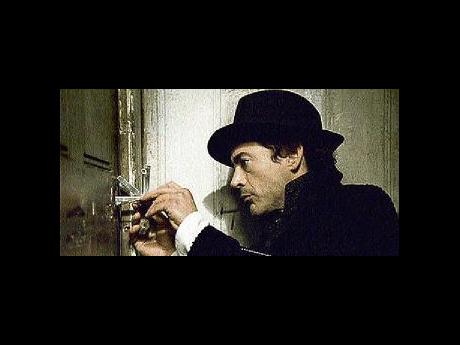 'Sherlock Holmes', a Warner Bros release, is rated PG-13 for intense sequences of violence and action, some startling images and a scene of suggestive material. Running time: 129 minutes. Three stars out of four. - Contributed

Take it from a lifelong fan of Arthur Conan Doyle: Robert Downey Jr is so NOT Sherlock Holmes.

That's not a hindrance - in fact, it's a big help - as he and director Guy Ritchie bring Conan Doyle's dusty Victorian-age detective into the modern world.

Enough of the trappings are left in their action romp Sherlock Holmes - the lightning-fast cerebrations, the encyclopaedic knowledge of London, the compulsive single-mindedness, the vain one-upmanship - to make Downey a reasonably faithful embodiment of the figure Conan Doyle created.

And of course, this is Downey, whose career resurgence rests on his ability to make the most unlikely role his own. He doesn't look like the classic Holmes, he plays the man as a scamp, he's after laughs as much as lawbreakers.

But Downey does a great Brit, he lives large in the part, and he brings a human spark to cold egghead Holmes that will help pack in huge audiences for a character on the fringes since the Basil Rathbone days.

Revisionists have done a number on Holmes before. He was psychoanalysed by Sigmund Freud in The Seven-Per-Cent Solution and spoofed by Gene Wilder in The Adventure of Sherlock Holmes' Smarter Brother.

So why shouldn't Ritchie put his London-rogues-and-rascals spin on Holmes and cast the detective into a brawn-over-brain action epic? After all, Conan Doyle's Holmes tales - particularly the novel-length ones - could be action rip-roarers.

Conan Doyle's Holmes was a monk who had no time or respect for women, save, in one thin story, a schemer named Irene Adler, the only woman who ever outsmarted him.

The literary Holmes admired Irene for her mind. Downey's Holmes admires McAdams' Irene for the whole comely package, and purists will groan over the puppy-dog caresses of Sherlock in love.

Holmes' big mystery is the case of Lord Blackwood (Ritchie regular Mark Strong, who physically resembles Conan Doyle's Holmes far more than Downey). Hanged for a series of ritual murders, Blackwood won't stay in his grave, returning to terrorise London with an assault on Parliament aimed to bring him absolute power.

Anyone who wants their Holmes unsullied by revisionists has two great choices: the supreme 1980s and '90s TV adaptations of Holmes stories, starring Jeremy Brett, an ideal incarnation of the detective as the author wrote him in those enduring Conan Doyle tales.

Who knows? Maybe the movie will make a few viewers go discover Conan Doyle for the first time.