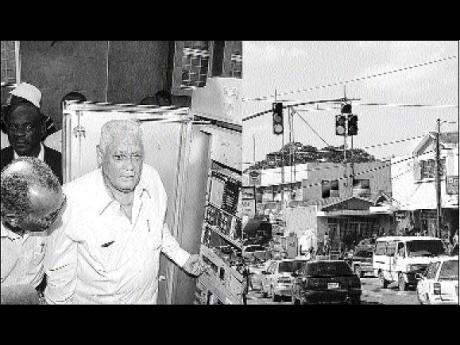 TRAFFIC CONGESTION in the town of Old Harbour, St Catherine, is expected to ease with the commissioning into service of new traffic signals in the town square.

Henry was speaking at a ceremony in Old Harbour on Thursday to open the Gutters-to-Free Town main road and to commission into service the traffic signals in the town.

"It is supposed to be a timed signal that relates to where the traffic moves, in order that you are not held up at the other side," Henry pointed out.

Special Sergeant Peter Murphy told the Jamaica Information Service that the traffic lights would help to make the job of the police easier, as personnel would not be required to direct traffic as much.

He said pedestrians, especially, were having a hard time crossing the roads or were doing so improperly and the lights would help to alleviate that problem.

Innswood High School student, Janice Farmer, expressed pleasure that the traffic lights have been erected. "Children will know what to do. When you are walking you will see the red hand (which) stands for stop and you have to wait until you see the 'walk' for you to walk. So this is best for us," she said.

In the meantime, Henry stated that the 10-kilometre roadway, which was rehabilitated at a cost of $141 million, was evidence of Jamaicans' "cess money at work".

He noted that the resurfaced road would provide a viable alternative to motorists who do not wish to use Highway 2000, which attracts a toll.

However, he cautioned drivers to be careful on the rehabilitated surface. "Let me equally say that as I repair roads, as I resurface them, let me ask the drivers to recognise that it is not meant for speeding. Respect the pedestrian, respect the school children," he urged.

The road works is just the first phase of a comprehensive road rehabilitation project being undertaken in the area. The National Works Agency (NWA) announced that the project is to be continued from Old Harbour to Sandy Bay with funding from the Inter-American Development Bank.

"It's a process of resealing, putting in the proper drainage and, as we go through the townships, putting in the necessary sidewalks so that the pedestrians who are users of the roadway have somewhere to walk and will not have to walk in the road itself," said chief executive officer of the NWA, Patrick Wong.