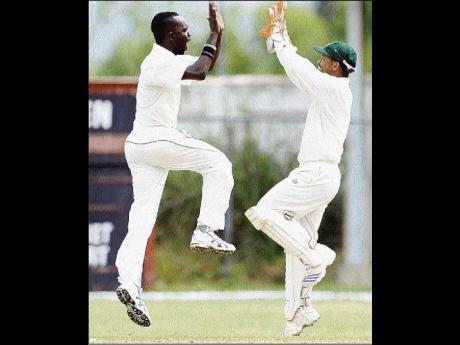 If the organisers of this season's WICB Regional Four-day Cricket Championship were looking for a competitive start to the feature match of the new-look season, then they certainly got one yesterday at Chedwin Park in the game between Jamaica and the Windward Islands.

A low-scoring but enthralling contest, the match, which was watched by a surprisingly large first-day crowd, saw both teams enjoying periods of dominance, with Jamaica coming out slightly better heading into today's second day.

Jamaica, after winning the toss and electing to field, dismissed the Windwards for 182; and in late afternoon, after facing 13 overs, were 36-2.

Jamaica's strong position was made possible via a magnificent bowling effort from left-arm orthodox spinner Nikita Miller, who claimed 7-28, his second-highest haul in first-class cricket. He was ably supported by leg-spinner Odean Brown, who finished with 2-65.

Rawl Lewis, with a mature 82 not out, led the way for the Windwards, while openers Tyrone Theophile, 26, and Devon Smith, 19, who had given the visitors a good 50-run opening start, were the next best scorers.

"The wicket was a bit difficult to bowl on. It wasn't offering much turn and I used a lot of variation and flight, bounce and turn to try and get wickets," said Miller, who claimed the Windwards' first four wickets to have them reeling at 59-4.

"I had to like use up different areas of the crease, hold back some balls, push through some deliveries, bowl with drift and use arm balls and wrong'uns to create problems. It was a lot of thinking and work and I am happy that I was able to claim seven wickets," he added.

Darren Sammy, captain of the Winwards, while expressing disappointment with his batsmen, said he was looking for an improved showing today.

"I think tomorrow will be the most important day of the game as we can't afford to make Jamaica make a lot runs and set a big lead," said Sammy.

"I would have loved for us to be batting still as the pitch was good for that. But having said that, runs on the board is runs on the board, so it's just for the bowlers to come out and try to apply pressure and try and limit Jamaica," he added.