Ride with Danielle My Girl 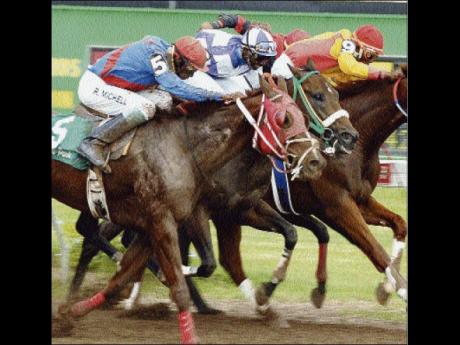 WILD GLITZ (No. 5) is brought with a well-timed run by jockey Richie Mitchell to catch a wall of horses in the dying stages of the 1100-metre special claiming race at Caymanas Park on New Year's Day. Trained by Vin Edwards for his wife Monica, WILD GLITZ won at odds of 15-1. - Colin Hamilton/Freelance Photographer

With a number of fit horses engaged, the race promises keen competition among the likes of recent winners BABY JAZZ and MELINDAGATA, down in class DANCING SAM, STREET SMART ANNIE, KAMECHI and DANIELLE MY GIRL.

The winner is almost sure to come from the abovementioned group, even though others such as AVABELLE and TIMOTHY SCOTT are fit and fast enough to keep them honest.

MELINDAGATA is an interesting entry, having changed hands on November 13 when scoring narrowly over 1200 metres. She was then claimed for $350,000 by Tony Kirlew on behalf of Patrick Brown, a member of the public who got an opportunity to own a horse free of cost in the landmark Power Wine race for $350,000 claimers.

Although I expect keen competition, the race will more than likely come down to DANIELLE MY GIRL and the imported filly BABY JAZZ, who won easily over this trip on December 13 in the fairly good time of 1:07.4.

BABY JAZZ, who was claimed out of her last race for $250,000 by trainer Joseph Thomas, runs for $350,000 today, but this will not deter her. True, she continues to be trained in the pool but is nevertheless fit enough to do herself justice and, having beaten better horses in the not-too-distant past, should fight out the finish from the convenient mark of 52.0kg.

Despite her sound claims, DANIELLE MY GIRL is preferred. The seven-year-old mare from the stables of Desmond Shand caught the eye on December 19 when chasing home the out-of-class COLEMAN'S ROCK in a fast-run 1200-metre race. She advanced smoothly into second a furlong out, but found the winner not for catching and was beaten by three lengths behind fast splits of 23.1, 46.4.

Having worked well in preparation for this trophy, DANIELLE MY GIRL, who last won over 1300 metres in May of last year, is fancied to score an overdue win. She looks leniently treated with 52.0kg and will have the services of the experienced jockey Clive Lynch.

I am expecting her to race in touch of the leaders into the straight, then out-finish the free-running BABY JAZZ, DANCING SAM and STREET SMART ANNIE in the closing stages.

Other firm fancies on the card are the impressive Imported Mile winner LADY HASTINGS to cool Superstakes winner HOMBRE in the ninth over 1600 for open allowance horses; and returning champion jockey Omar Walker to win with all three of his mounts - BURNING CIELO, EXCELLENCE and IT IS WRITTEN in the third, fourth and fifth, respectively.