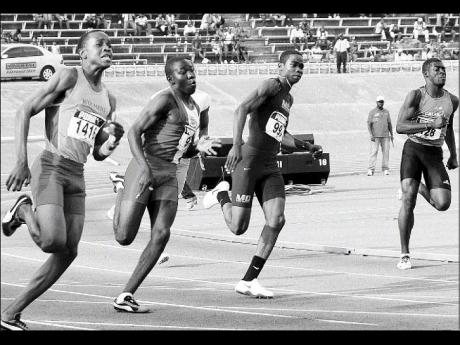 Bridgeport High's Jazeel Murphy (second left) on his way to victory in the Class two boys 200m final over Munro's Delano Williams (second right) and Wolmer's bronze medallist Julian Forte (left). Calabar's Travis Drummond (right) finished eighth during the fourth and final day of the 99th staging of the ISSA/GraceKennedy Boys and Girls' Athletic Championships at the National Stadium on Saturday, April 4, 2009. Murphy, who won in 21.38 seconds, will be one of the star attractions at today's meet. - Anthony Minott/Freelance Photographer

The 2010 track and field season official runs off today at Jamaica College, Old Hope Road, with the staging of the WATA/Powerade/JC Track and Field development meet, beginning at 8:30 a.m.

Dubbed 'The meet with a difference', the organisers have gone the extra mile this year to make sure all the athletes complete their events today.

There are a couple of new features to the meet, the most notable being the new International Association of Athletics Federations (IAAF) false-start rule, which will be applied.

Unlike previous circumstances, under which the first false start was accredited to the field and an athlete disqualified for each one afterwards, any person who makes a false start will be immediately disqualified.

Another new element is that the latter part of the meet will be run under lights. The organisers said this has become necessary because entries have been rising each year, and due to the volume, meets in the last couple of years have not been completed.

Most of the island's top schools will be participating. The boys' institutions include hosts Jamaica College, Kingston College, Calabar, Bridgeport with Carifta Games Under-17 sprint double champion Jazeel Murphy, Wolmer's, Holm-wood and Manchester.

A maximum of four competitors per team, per event in each class will be allowed. Teams have been requested to wear their regular competition colours.

As is customary, the organising committee pays special tribute to a person and this year's honouree at the annual meet is Roger Chang.

"Jamaica College is truly blessed to have Roger on-board. For the last 15 years he has spearheaded the data processing and results generation for this and numerous other meets islandwide," the organisers said in a release.

"For all the recognition and respect that Roger has brought to our event, as well as track and field in Jamaica, we salute and honour him."