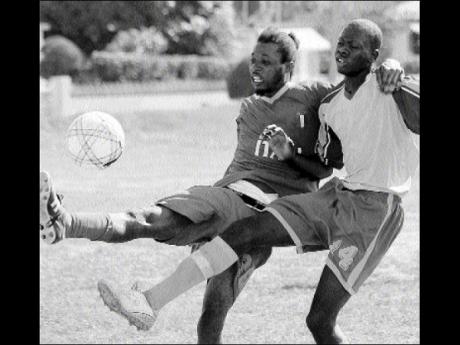 The Jonathan Hibbert Foundation, established in January 2006 in memory of the former Munro College daCosta Cup player, will stage a football scholarship festival at the school today, starting at 9 a.m.

The day's activities are set for Munro College football complex. According to the organisers, the main aim of the foundation is to secure scholarships for student-athletes to universities abroad. The foundation is in its fifth year. Scholarship opportunities are available for young people age 17-23. Since its inception, 49 students have obtained scholarships through the foundation - 45 in football and four in basketball.

Present at this year's tournament will be coaches from several US universities, including the head women's football coach from William Carey University. Carey were the 2007 and 2008 GCAC Champions.

The thirteenth staging of The Grace Western Union Youngster Goldsmith Hurdles and Field Events Classics will be held inside the National Stadium on February 6.

In a release, the organisers said in addition to all the hurdles events and field events they have added the 1500m to go with the 100m, 400m, sprint medley relay and the Invitational Swedish Relay.

They are considering the inclusion of an invitation distance medley relay, depending on the amount of interest shown by the teams. This is to help teams qualify for Penn Relays 2010.

Twenty-one teams, including defending boys' and girls' champions St Jago, have confirmed that they will take the courts in the second annual Knox College Six-A-Side Volleyball Classic at the Knox College courts today.

More teams are expected to register before the first serve at 9 a.m.

The one-day event, which is being staged by the Knox College Sports Committee, will be bigger than the inaugural tournament, as more teams from parishes across the island will participate.

The event is being used to rebuild interest in the sport at the school and as a fund-raiser for the sports department.

In the day's other matches, Kemar Brown struck in the fifth minute to give Delta Force a 1-0 win over Kool Kat, while Heartease and Springrain ended in a draw (0-0).

On Thursday, Prospect, led by a brace from Tyson Robinson in the 10th and 90th minutes of play, beat Sandstar 2-1, while Yallahs and Lyssons played to a 1-1 draw.

On Tuesday, Sandstar host Springrain at Petersfield and Kool Kat go up against Yallahs at York.

The three-day football scholarship festival ends this afternoon at the University of the West Indies, Mona Bowl. The UWI and the Inter-Secondary Schools Association (ISSA) are hosting the event.

An All-Manning versus All-daCosta pre-game match takes place today at 1p.m. at the Mona Bowl, and will be followed by the UWI Mona's Major League game against Police at 3 p.m.

The football scholarship festival is part of the refocused sports development efforts by UWI, Mona. The event is designed to allow talented and academically eligible young athletes to be recruited by local and overseas coaches, and provide an opportunity for them to attend a local or overseas university on a scholarship through opportunities created through participation in the festival.

Saggitta Sports, a sports marketing agency, is in the planning stages of a St Elizabeth 3 vs 3 football carnival, set to kick off on April 4.

There will be 68 teams, six players per team. They will be grouped in categories for female, under-12, business house, masters and club. The winners of each category will receive cash prizes and the championship trophy.

All the teams will wear a blue ribbon in support of the campaign to prevent child abuse. There has been a drastic increase in reported cases in the parish since 2007.

In a Saggitta Sports release, the organisers, in seeking partners, stated: "This is an exciting concept and a very promising opportunity for your organisation to tap into St Elizabeth."

The inaugural carnival is set for the SDC complex in Santa Cruz. Action is set to start at 8 a.m. and end at 7 p.m.

A maximum of four athletes per event, per class, per team will be allowed.

In a news release, the organisers said co-educational schools and institutions must complete separate entries for their male and female teams. A discounted entry fee of $4,000 per school is applicable.

Invaders are coming off an embarrassing 4-0 defeat against Treadways and remain pointless, and Passagefort have so far won two games, and drawn two. In other games, Wanderers (8) tackle Treadways in what should be a keen matchup at the Passagefort playing field.

Three matches are on in the E-Services-sponsored Portmore Division Two Football League tomorrow at two venues in Portmore.

At the Passagefort playing field, Braeton United tackle Daytona in a 3 p.m. matchup. A double-header is scheduled for the Christian Pen playing field. In the curtain-raiser at 1 p.m., Racing United square off with Westport, whereas Hamilton Gardens battle Christian Pen in the feature clash at 3 p.m.