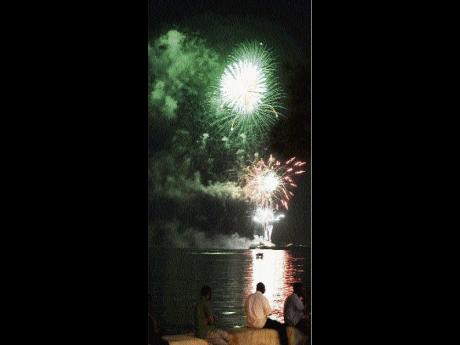 The waterfront in Kingston came alive for 2010 with the Urban Development Corporation's annual fireworks display. Onlookers watch the spectacle from the harbour. - Norman Grindley /Chief Photographer

Thursday night, when fireworks lit up the skies over Kingston Harbour, Sylvester Johnson tightly held on to his son Kareem's legs - he was sitting on his shoulders. The youngster beamed with joy as the dazzling, coloured lights, accompanied by onomatopoeic explosions, created fleeting works of art above the polluted waters. But Sylvester was looking at the sea, which he had jumped into many times, years ago.

It was the late 1970s and Jamaica was in political turmoil. Sylvester was having his own maelstrom. A homeless boy he was, whose hobby was diving into the harbour several times a day. The waterfront was his home, other homeless boys his family. The streets were his school, and did he learn a lot. Now, the melange of good and bad memories had transported him from the present - he didn't hear the very loud climactic sounds that heralded in 2010.

The camaraderie with the other boys, the fights, the sharing of food afterwards, the deaths by drowning, the disappearances, the pursuits by the police. The men who drove by at nights trying to seduce them with gifts and money. The teacher woman who promised to school him, but kept him at home as a servant.

When he decided enough was enough and refused to wash her undies, she called the police to say he had broken into her house. The trip to the police station and the leap over a high wall after he bolted from the police car when the lone lawman got out to urinate along the road. Scenes of those and more he watched in the reflections of the lights from the calm waters.

But, it was when the face of the woman he saw at North Parade started to emerge from the glare that the sea became black once more and Kareem shook him from his reverie. He stooped as his 10-year-old burden of a son jumped from his broad shoulders. He held his hand and they headed to Parade via King Street.

Sylvester's pace was fast. Tired, little Kareem struggled to keep up with him. "Can't we get a cab, Dad?" he whined. "Soon!" was the short response. He had to see her again.

The walk up King Street brought back more flashbacks. But, how much it had changed. Dirtier, it certainly was. Too many buildings in need of renovation, he thought. Where is Time Store? He wondered. He didn't see it on the way down. And all those fast-food stores.

At the top of King Street, at South Parade, he turned east, homeless people lined the sidewalk. His heart beat faster as he turned on to North Parade. He glanced about, but she was not around. He looked again, but the woman in the red head wrap was nowhere to be seen. People were all around heading back home.

At the taxi stand, in front of The Captain's Bakery, he boarded a cab. Kareem was first in. He rested his head on his father's leg and fell asleep immediately. Sylvester rested an arm around Kareem's waist, and his thoughts went back to the events of the day.

He was back in Jamaica after being away for years. Bitterness had kept the divorced, single father at bay. This year, however, he won over. He wanted to show his son his roots. From New York they had arrived two days before Christmas. They had a good time but, deep down, Sylvester hoped that he would have gone back to New York with a lighter heart.

Thursday, on his way to the waterfront he gave Kareem a tour of sections of downtown Kingston. At Parade, he circled the recently renovated St William Grant Park, as he told the wide-eyed Kareem about the place he had frequented as a homeless youth. He was about to tell him about the unsightly Ward Theatre, when he saw a woman leaning against the wall that enclosed the park, across from the Rollington Town taxis.

He stopped and stared at her. "You know her?" Kareem asked. "No," a confused-looking Sylvester replied. Kareem tugged his hand, and they continued down East Parade. Sylvester became silent no longer the upbeat tour guide he was. All the way down King Street the woman was on his mind - that face, her face was so familiar, only that it was older.

When the taxi reached his hotel, he brought the sleeping Kareem to their room. After tucking him in, he took a shower, had some ginger wine on the rocks, then went to bed. But all night he didn't sleep a wink. The face haunted him.

Friday morning, he brought Kareem to stay by a long-time friend of his who, too, was vacationing in Kingston. Into another taxi he jumped. The woman's face was calling. Strange, but he was nervous. The journey seemed longer than usual. Upon arrival, he saw her, at the very spot she was the day before. As he approached her, his heart raced. He knew her, he was sure. But she was fatter and had aged, looking so much different from the last time he had set eyes upon her, over 30 years ago.

The woman raised her head. Her eyes were closed. Slanting her head to one side, she asked, "Who it is?" Her voice echoed in his skull, as it did many times before.

"A say, who it is? Yuh giving me something?" She was now holding on to the white cane resting on a thigh.

Sylvester stood speechless. His throat got tight. Then the tears, and the memories of Miss Babsy came in torrents. He fell to his knees and cried uncontrollably. He held her sore and swollen legs, and squeezed them.

"Clear off!" the woman cried out.

"Mama!, it's me, Sylvester!" he whispered through his sobs.

This time he answered her, unlike the day when she gave him the last beating.

"Sylvester! Sylvester!" she shouted - the meal of dumplings and butter was ready. It was after she gave him a sound spanking for coming back from the shop with steel wool that was 'married' to flour. But Sylvester was gone. Tired and weary Sylvester had gone, just as his 'father', the man who called him a 'jacket' had disappeared.

Now, he was at her gangrenous feet, weeping as a child. Miss Babsy held his balding head, which he rubbed against her knee and said, "Never mind, my son, never mind."