Under the Peace Tree with Miss Lou and Principal Jackson 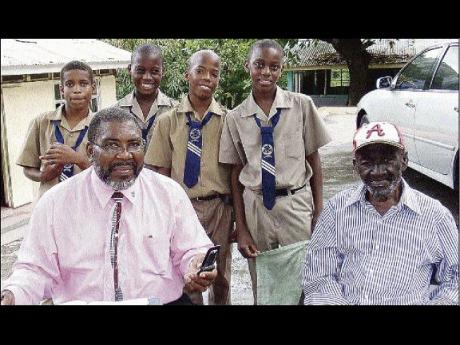 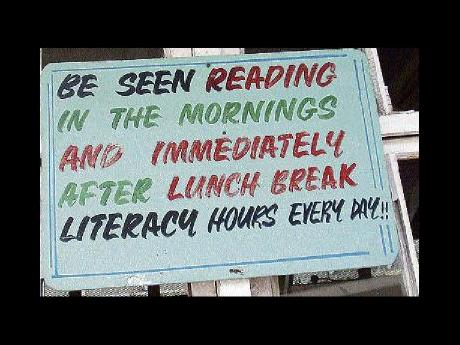 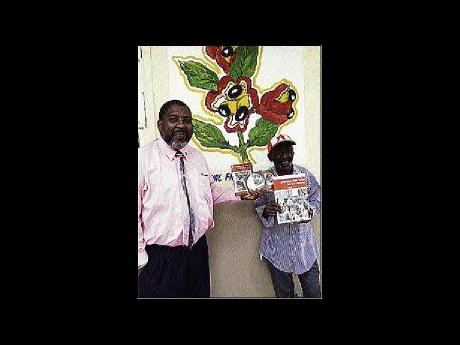 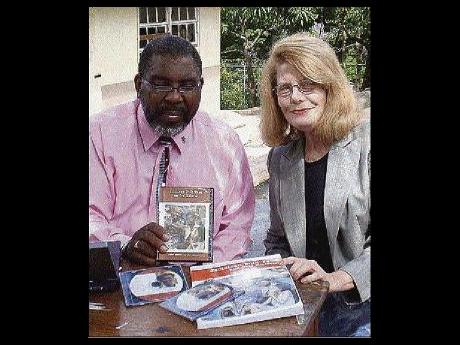 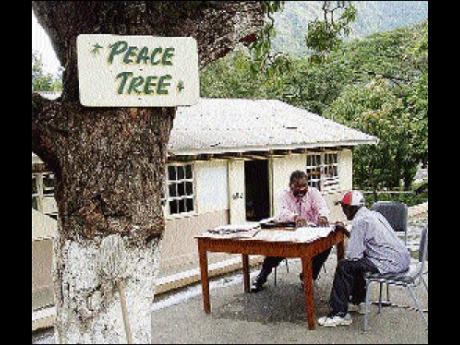 The first time I ever visited a school in Jamaica was in 1973. I was starting my research on Jamaican oral narratives, primarily of African origin, and had been directed to speak with an official at the Tivoli Gardens School. She had been the government research officer for oral narratives while Olive Lewin had been the officer responsible for researching traditional music. As I arrived, the school was in an uproar because gunmen had just stolen whatever cash had been in the school canteen or office. That lady went on to dedicate herself to public service and her research has remained unheralded.

My next venture into a Jamaican school came when I was invited to show the video: Jamaican Folk Tales and Oral Narratives based on my book of the same title. This was, perhaps, 1988 at Haile Selassie Secondary School. Again, as I arrived there was a minor disturbance as gunmen had fired on the school but had not gained entry so I was admitted and invited to proceed. Throughout my talk and subsequent screening of the video, the very lovely young female teacher, dressed in shirt and pants, patrolled the aisles with a leather belt attached to her right fist, reminding me of nothing so much as a lion tamer at a circus.

So when Principal Winston Jackson of the Louise Bennett-Coverley All-Age School left his card with a message that he wanted to purchase the Jamaican Folk Tale video, I let his card sit until some time later when I had updated the video to DVD. I then sucked in my breath and, when asked if I would like to speak to the students about it, said I'd much rather just interview him and donate a copy in memory of Miss Lou. I took along the oldest surviving storyteller from the original 1987 filming, as much for protection as to give Brother Martin an outing. He's a good friend and at 86 doesn't get out from August Town as much as he once did.

I'd forgotten how long the drive to Gordon Town was. Even after crossing the bridge, it seemed quite a ways into the hills before suddenly we saw this lovely white set of buildings down amid a green valley. The gate opened and there, beneath the broad limbs of a spreading tree, sat Principal Jackson at a small wooden table in the yard, beside a sign: The Peace Tree. To find such an oasis of tranquility in this day and age gave me hope for Jamaica!

Born in the district of Guava Ridge, just a few miles from Mavis Bank, he was one of seven children, his father a farmer, his mother an Evangelist at the Church of The First Born Assembly. Young Winston attended Content Gap All Age School as it then was, went on to Papine Secondary and then to The Preceptors Institute where he did his CXC and A levels before graduating from Mico Teachers' College. His first teaching post was at Gordon Town in 1973 where he met his future wife, Joyce, also a teacher. They married in 1975 and he left for Mona Primary and then St Martin de Porrus Primary. He remembers: "being newly married, I wanted to be away where I could see her in the afternoon and not so much here during the day. But as you grow older, become more mature, I decided the only time I would come back to this school is if I became the headmaster."

Now everyone knows that the Hon Louise Bennett-Coverley, storyteller par excellence and purveyor of Jamaican culture at its best, was married to Eric Coverley, known in his heyday as 'Chalk Talk' Coverley for his own stage performances, but few people know that his greatest contribution to Jamaican culture may have been as chairman of the school board in Gordon Town for over a decade. It was Eric Coverley who persuaded Winston Jackson to apply for the post of principal in 1990. Joyce was a senior teacher and later became vice-principal. Together, the Jacksons worked to create this extraordinary school and still live in the area. Says Principal Jackson: "Miss Lou would visit, sing with the students, recite her dialect, and just share with them for the day. I'm still trying to locate it but I have a live recording when she came, sang, spoke to the children and challenged them to do better."

There were 150 students when Jackson took over and now 685 are enrolled with 21 teachers. They set up their own reading intervention to assist students, the first of what they call the 'Competency Shelter' which the Ministry of Education has adopted and is now in over 90 schools in Jamaica. They made their own charts, games and whatever they could afford. Principal Jackson notes:

"Miss Lou would say: 'Tun yu han an mek fashion.' We didn't have the money to buy all the fanciful gadgets to use." But they saw the results of their dedication in increased passes on Common Entrance, then grade nine achievement, and grade seven, the technical entrance. Recently, they were among 22 schools in St Andrew and Kingston which have got 80 per cent and over in the grade-four literacy tests.

He confides: "Parents take a great interest in the school, because of the quality work that they see the teachers producing. We boast one of the largest PTA attendance in Kingston and St Andrew. Others are saying it might be throughout Jamaica. Four hundred to 500 parents turn out for our bi-monthly PTA meetings, rain or shine. Not only females, fathers make a very special effort to share in the life of their children. A few parents are drawn from the city, but they're all humble people. Those from the hills are farmers, people who run their own private business and housewives. But they all come here because they see we are trying to improve the standard of the students."

Past students have also made a difference. Those in New York donated computers to the school in May 2009, while past student Sir Roderick Rainford - Rhodes Scholar, past Governor of the Bank of Jamaica and Caricom Secretary - set up a Trust Fund and attends graduation ceremonies to personally award grade-six students getting highest grades.

School Board Chairman, Mr Barrett, previously their Member of Parliament, along with board members like Ancille Beckford and Ancille Gloudon were instrumental in getting the dilapidated, termite-infested buildings, overrun with rats, finally demolished. The Ministry of Health closed their canteen and the fire department was at them because of their deteriorating structures. So, two years ago, they were rewarded with a brand new school, built under the Primary Education Support Project, and appropriately named the Louise Bennett-Coverley All-Age School.

Although his wife is retiring, Principal Jackson acknowledges: "I love my work!" He relates how one summer he was employed at the Esso Lube Plant on Marcus Garvey Drive to earn extra money. Because mathematics is his strong subject, he was to convert their old system of weights and balances to the metric system. After seeing his work, the manager offered him a job, which Jackson declined. He remembers: "When I told other workers they said: 'You must be crazy! You want to return to teaching?' One man said he'd graduated no further than grade six standard and he was making much more money than what I was making. But I told him, the love for working with students and to see them improve, that brought much more joy to me. So that's why I'm still in the profession."

If his fellow worker at Esso could see what a beautiful place he, his wife, staff members and others have created, he might change his mind. I told Principal Jackson: "You're surrounded by the goodness of your work." He uses a simple but effective method to avoid violence among students. Jackson says: "We ask them to come to the Peace Tree and talk over the problems that they have. One thing that I do, I make myself available at any time. If I'm even having my lunch and they knock my door to say 'Sir, we're having a problem,' I stop what I'm doing, come and we sit and talk. That has helped eliminate most of the confrontations. We don't have major problems here. Thank God, up to now."

The combination of caring parents, dedicated teachers, motivated students, surrounded by nature, with wise leadership, has resulted in an exceptional school. Thank you Winston Jackson, my idea of a true Jamaican hero, who keeps the spirit of Eric Coverley and Miss Lou alive, under The Peace Tree.

A sign used to motivate students at Louise Bennett-Coverley All-Age School to read.