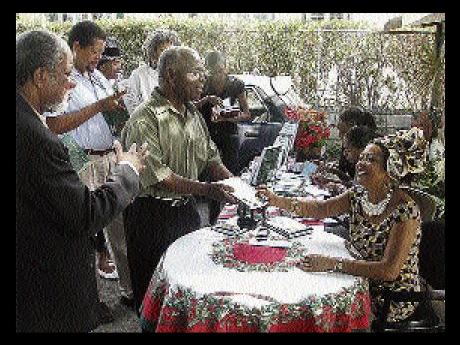 Professor Verene Shepherd's recent launch of Livestock Sugar and Slavery: Contested Terrain in Colonial Jamaica was a notable first for publisher Ian Randle. It was their debut official public presentation of a publication on their own premises at Cunningham Avenue, St Andrew.

Shepherd's book is also the first in a series on forgotten histories of the Caribbean.

She noted that Livestock, Sugar and Slavery: Contested Terrain in Colonial Jamaica has been long in the making, what with her increased workload since being appointed professor in 2001. Still, Shepherd said she thinks the long wait paid off in the end as "it is a better book".

"Everything needs reflection," Shepherd said. "Luckily, no one published a full-length study in the interim."

In her address at the launch, Dr Patsy Lewis summed up and examined the book more closely. Lewis said Shepherd's "introduction seeks to locate pens in the larger historical context of contestation over land - both symbolic and literal that characterised Jamaica, beginning in conflicts between Ciboney and Tainos, continued in conflicts over land and resources between pens and sugar plantations and reflected in conflicts over terrain in today's garrison communities. But the book's main focus is in excavating the role of pens, alternative systems of economic production to the dominant sugar plantations, in laying the foundation of a post-sugar economy."

Lewis went on to say "the value of Verene's book goes beyond providing us with the basis for a more nuanced understanding of the complexities of the slave economy and the social and racial relations it generated, but in the lessons it holds for social scientists who seek to understand the present and shape the future, as delusional as that may be, and seek insights into understanding the problems that plague the society. Verene's book illustrates some of the enduring features of Jamaican economic and political realities which should inform social science scholarship."

Lewis concluded that Livestock, Sugar and Slavery: Contested Terrain in Colonial Jamaica "is a good place to begin in a project aimed at excavating 'forgotten histories'."

Shepherd went back to some strong personal memories which came in the course of making the book when she spoke at the end of the launch, speaking about those who also battled the cold and snow to finish the PhD And in thanking the University of the West Indies for grants, a sabbatical year and fellowships, she laughed as she mentioned the shopping jaunts with friends in various countries, which provided a much-needed break. "Don't underestimate retail therapy, people!" Shepherd said.

She also thanked Professor Barry Higman for encouraging her to do more on a topic which she thought had been exhausted, as well as the graduate students who worked with her.