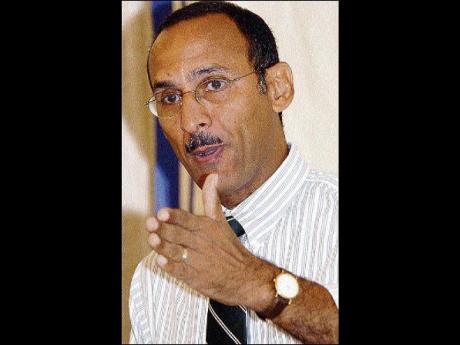 The gains from the introduction of a graduated income-tax scheme will earn the Government little revenue, economist and university professor Damien King is suggesting in a swipe at the tax package announced December 23 by the Golding administration.

"When we talk about taxation, the only thing that's important is the collectability of the tax, the ability of the tax to earn revenue and not to chase away the activity you are taxing, and in many of the taxes we have failed on both those counts, including trying to tax 578 people at the rate of 35 per cent," said King.

The actual numbers are slightly more than the economist said in a speech he gave Wednesday at a luncheon meeting of the Lion's Club of Kingston.

The Tax Administration Services Department said salaried millionaires on the PAYE roll whose remuneration rises above $10 million number more than 700.

In an effort to raise an annualised $21.8 billion in revenue to help close the fiscal deficit, the Government in December announced new tax measures that included the intro-duction of a graduated personal income-tax scheme that will now see higher income brackets paying higher taxes effective January 1.

The 25 per cent remains on salaries of $5 million and below.

Previously, everyone paid a standard rate of 25 per cent.

The revenue expected from this measure is estimated at $1.317 billion annually, but it is temporary and scheduled to expire at the end of fiscal year 2011.

But King told the Lion's Club that by introducing a graduated income-tax scale, the Government has incentivised the handful of people liable for the higher tax to seek placement in a lower income bracket.

"In other words, that's a clear signal it is going to yield no revenue."

King based his argument on the analysis that a good tax raises revenue and minimises distortions, while a tax is bad when it is differentiated and allows for distortions, shifting away from the tax activity towards the tax-exempt activity.

"Tax has to minimise distortions. If it changes the activity that you are taxing, then everybody ends up being worse off," King said.

Those criteria, he said, give a good measure of how to levy taxes and to stay away from bad taxes.

"When you differentiate your taxes ... you introduce opportunity for evasion, distortions and make it absolutely impossible for the tax collector to collect taxes," he said, suggesting that it was a bad tax.

The best taxes, he added, are those that are uniform across the board and universal, in that they are paid by everyone.

The decision to standardise the GCT rate at 17.5 per cent that was originally announced on December 17 was, King said, a good thing, as were the raising of GCT on tourism products, removing the GCT exemption on products, introducing GCT on electricity, and the ad valorem on petrol.

The subsequent reintroduction of exemptions in the revised tax package he saw as a bad move.

"Exemptions create legal avoidance and opportunity for evasion, so make taxes much less than what they could be," said King, pointing out that the Matalon report of 2004 identified about 220,000 tax exemptions in the tax code.