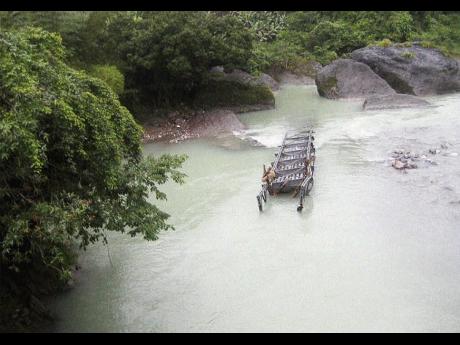 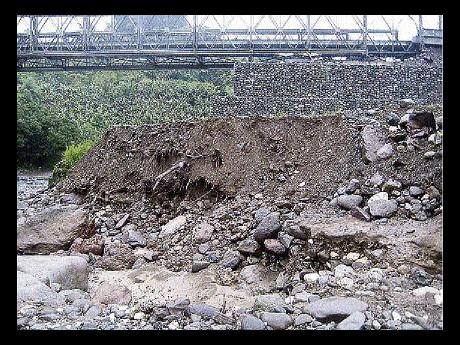 Remains of the Bailey bridge, which was washed away two weeks ago by the Rio Grande.

The Alligator Church Bridge, which serves a number of communities including Mill Bank, Comfort Castle and Bellevue, has undergone a series of heavy batterings over the past six days, as torrential rainfall continues to pound the upper Rio Grande Valley.

As a result, residents are contending that unless Gabion baskets are erected along the river bank on the eastern approach to the new Alligator Church Bridge under construction, the earth surrounding the first concrete column to the approach could collapse should the heavy rain persist.

"A large portion of land, which borders the concrete column from the river, collapsed (last week) Sunday and Monday during the heavy rain," related Spencer Swaby, a resident of Ginger House. "The Rio Grande overflowed its banks and rose to more than eight feet, eroding a massive portion of land near the entrance to the bridge.

"A barrier in the form of Gabion baskets needs to be erected so as to prevent the river from eroding the remaining portion of earth, which could cause serious damage to the bridge," Swaby added.

Albert Thomas, 72-year-old retired engineer and returning resident from Great Britain, said the contractors needed to listen to the concerns expressed by the people.

"The Gabion baskets would act as a shield or barrier, which would prevent rising water from the Rio Grande getting to the land area - resulting in more land slippage," Thomas said. "Failure to do this could prove to be catastrophic, as the foundation of the bridge will eventually be weakened, and a collapse would then be imminent."

Less than two weeks ago, a 120-foot Bailey bridge, which was erected to allow residents to cross the Rio Grande on foot, was washed away and deposited down stream by the roaring and enraged river, which not only overflowed its banks, but also cleared just about everything in its path.

While the concerns and worry among residents are mounting, liaison officer at the bridge-construction site, Pauline Gordon, told The Sunday Gleaner that the contractors had yielded to the requests of the residents, and had taken the decision to put in place Gabion baskets to prevent further erosion of the land.

"I was given the assurance that the threat posed by the Rio Grande would be addressed speedily. They are quite aware that Gabion baskets are needed, and, therefore, residents can rest assured that they will be getting high-quality work here in the Rio Grande Valley," she stated. "All the necessary precautions will be taken to ensure that this new Alligator Church Bridge outlasts its design life."

Approximately $200 million is being spent to construct the new bridge by RM Murray Construction Company. Upon completion, the new bridge will measure approximately 240 feet in length. The contractors said that they encountered some delays along the way, as residents have to walk along the work site to conduct their usual business.