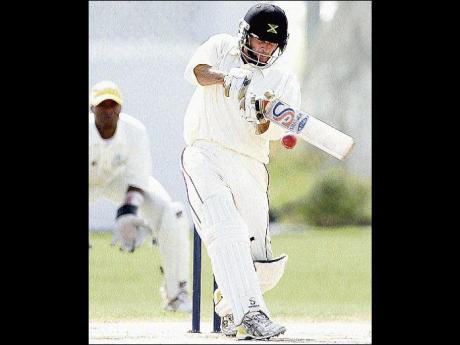 Jamaica's Brendan Nash on the go against the Windward Islands in the WICB Four-day Cricket Championship match at Chedwin Park yesterday. Nash made 40. - Ian Allen/Photographer

Wavell Hinds reminded cricket fans that he still has what it takes to perform at the regional level when he slammed 95 to push defending champions Jamaica into a commanding position against the Windward Islands at the end of the second day of their WICB Regional Four-day clash at Chedwin Park.

The 33-year-old Hinds, whose place in the team has been questioned by some who believe he was past his best and should make way for younger players, hit eight boundaries and four sixes in a defiant three-hour-and-18-minute knock to guide Jamaica to 335, this in reply to the Windwards' 182.

Facing a 133 first-innings deficit, the Windwards, who lost main batsman Devon Smith to the first ball of the innings, yorked from by pacer Andrew Richardson, were 19-1 when stumps were drawn.

"It was an impressive innings from Wavell and it has put us in a very good position to push for an outright win," said Jamaica captain Tamar Lambert.

"He was positive and made use of what was a good batting track," he added.

Coming to the crease with Jamaica at 138-4, Hinds batted with maturity and assurance and shared in two valuable partnerships with David Bernard Jr and Carlton Baugh Jr, as Jamaica, who were at one stage 151-5, stamped their authority in front of what was another surprisingly large gathering.

Hinds first shared a 75-run fifth-wicket stand with a fluent-looking Bernard Jr, who made 33, and then 50 with Baugh Jr, who scored a characteristic quick-fire 23, inclusive of five fours.

Donovan Pagon, who resumed the day on nine, went on to make a gritty 56, and Brendan Nash, who looked comfortable from ball one, 40.

Captain Tamar Lambert, who was 19 not out overnight, made 27.

Pacer Kenroy Peters, with 3-64 off 22 overs, was the Windwards' leading wicket-taker, while former captain Rawl Lewis, who bowled tight and was perhaps the most penetrative of his counterparts, ended with 2-40 off 13 overs.

Shane Shillingford, who ended last season as the second-highest wicket taker, struggled to find a rhythm and extract turn on what was a good second-day batting pitch, and finished with 0-61 off 19.5 overs.

"They made a lot more than we were expecting, but having said that it's an opportunity for our batsmen to put up their hands and take advantage of what is good batting track," said Windwards captain, Darren Sammy.