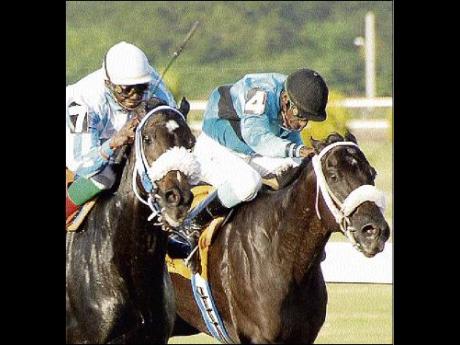 Having failed by one winner to catch Omar Walker in the 2009 jockeys' championship, Paul 'Country' Francis bounced back to his best form at Caymanas Park yesterday with three winners on the 10-race programme.

Francis, a two-time champion apprentice, also won aboard 2-1 chance ROYAL MAJESTY for trainer Everal Francis in the second race (claiming $550,000-$500,000) over 1600 metres, getting home in a driving finish from the favourite ROYAL BLAST, as well as odds-on favourite NAVAL COMMANDER for newly crowned champion owner Ruth Hussey and her son, Percy, in the third race over the straight five course.

Francis was content to bide his time in third position aboard the Delroy Wisdom-trained SIR ARCHIBALD, as the 8-5 marginal favourite BABY JAZZ led at a fast clip in the backstretch, ahead of STREET SMART ANNIE.

BABY JAZZ shortened on entering the straight, giving way to SIR ARCHIBALD approaching distance. But the race was by no means over at this stage, as highly fancied DANIELLE MY GIRL (8-5), who was never far off the pace, mounted a challenge early in he last furlong after coming wide into the straight.

In the end, SIR ARCHIBALD, under a strong ride from Francis, held on dourly to beat the Clive Lynch-ridden DANIELLE MY GIRL by half a length in a driving finish, as BABY JAZZ faded into third.

Finishing fifth in the 10-horse field was MELINDAGATA, whose owner, Patrick Brown, got an opportunity to own her free of cost, for six months, through the landmark Power Wine promotion on November 13.

Trainer Tony Kirlew saddled two winners on the card in 6-5 favourite ROYAL AWARD in the apprentice race and even-money favourite LADY HASTINGS in the open-allowance mile, both ridden by young Gordon.

The American filly LADY HASTINGS ran on strongly early in the last furlong to beat SHANGHAI PASS in decisive fashion in a field of six.

Dennis Pryce also saddled two winners in ELOPING EMMA (5-1) and evens favourite ARDRIGH, both ridden by Andre Martin, in the first and last races, respectively. And returning champion jockey Omar Walker rode one winner in the Wayne DaCosta-trained EXCELLENCE from only two rides.

The three-time champion resumed riding yesterday following a two-month absence due to injury sustained in an October 31 spill.