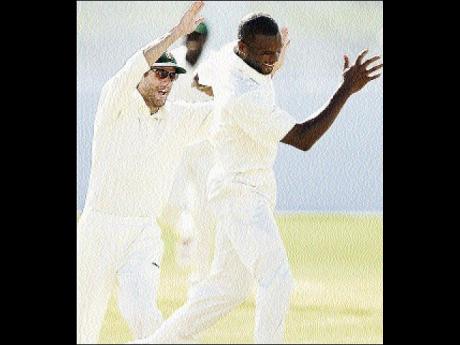 It would take a bowling effort of immense proportions to deny defending champions, Jamaica, victory over the Windward Islands, in their opening-round WICB Regional Four-day Championship cricket match at Chedwin Park in St Catherine.

Set a comfortable victory target of 97 after restricting the Windwards to 251 in their second innings, Jamaica were 20-2 when stumps were drawn on yesterday's third and penultimate day, 78 runs shy of recording their first victory in the reduced seven-round tournament.

Opener Xavier Marshall, not out on 10, and skipper Tamar Lambert, who were unable to take the crease due to bad light, will resume batting today for Jamaica, who in their first innings, made 335 in reply to the Windwards' 182.

Brenton Parchment, nought, and Donovan Pagon, eight, are the batsmen back in the pavilion.

"We have had a little struggle at the top of our innings. But we are confident that we will come out tomorrow, get the runs required to get us off to an ideal start," said Lambert.

After holding the upper hand during the first two days of the contest, Jamaica went into overdrive yesterday as they sought to wrap up the match in three days.

But thanks to another unbeaten half-century from Rawl Lewis, they were denied in their attempts.

Batting at number six and with the tail, the 35-year-old Lewis, who made a face-saving unbeaten 82 in the first innings, rescued his team from a position of 130-7, after they had started the day on 19-1.

He first shared in a crucial eight-wicket stand of 50 with Lindel James (33), and then a 46-run ninth wicket stand with Kenroy Peters, as Jamaica's bowlers, showing less of the killer instinct than they did in the first innings, were kept in the field for most of the day.

Left-arm spinner Nikita Miller, who claimed seven wickets in the first innings, was less efficient in the second and ended with 2-71 off 33 overs. Leg spinner Odean Brown, who surprisingly at no time looked threatening throughout his 26 overs, also took 2-71. Pacer David Bernard Jr ended with best figures of 2-55.

"I thought the Windwards batted well towards the end of their innings, especially Lewis who again showed what he is capable of. I think we could have also bowled better. But having said we have put ourselves in good position," explained Lambert.