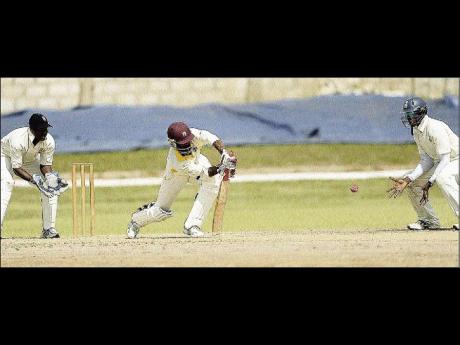 However, the turning point could yet come from Runako Morton, who is set to resume on 78 - more than one-third of his team's second innings total of 186 for six - this after rain stopped play for the final time yesterday.

The Leewards, on yesterday's penultimate day, started their second innings on 20 without loss, having been dismissed for 236 in the first. They narrowly won first-innings points after dismissing Barbados for 229.

Pedro Collins struck in the first 10 minutes for Barbados, when he bowled Kieron Powell for 12 at 24 for one.

Morton joined Montcin Hodge and the two added a very important 114 runs for the second wicket, as they frustrated Barbados with patient batting.

Hodge, who batted for over three-and-a-half hours and hit three fours, edged Collins behind for 55.

The wicket triggered a middle-order collapse as after Collins picked up his third wicket - having Tonito Willett caught behind for seven - Ryan Hinds picked up three quick wickets, removing Steve Liburd (7), Omari Banks (3) and Devon Thomas (0) as the Leewards lost five wickets for 43 runs.

John Archibald, Leewards' coach, said he would feel better if his team had only lost four wickets.

"I thought the rest of the guys could have taken a page out of Morton's book and just apply themselves a little bit better. But at the end of the day we are still in a fairly decent position," he said.

"It's very important that we get a good partnership (today) so we can dictate the game," he added.

"It's still open," he said. "Both teams have had their ups and downs."

Concerning his bowlers, he added: "What Barbados did was to stick their task; we stuck to the plan. They were very patient and they put us back right into this game when the Leewards were threatening to take it away from us."