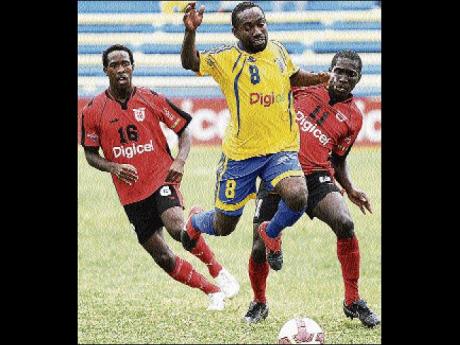 Harbour View have made it through to the Digicel Premier League second End-of-Round final, where they will play Waterhouse, thanks to a 1-0 victory over struggling Arnett Gardens yesterday at the Harbour View Mini Stadium.

The win lifted Harbour View's second round tally to 20 points, six less than Waterhouse, who beat Boys' Town 1-0 at Waterhouse Mini Stadium. The Red Brigade had a chance of making the End-of-Round final, but their loss to Waterhouse left them with 18 second round points.

Arnett gave a very spirited performance and came close to opening the scoring in the 18th minute when Kevin Wilson's shot from the edge of the 18-yard box was parried by Harbour View's custodian, Dwayne Miller. The rebound fell at Dwayne Plummer but his shot was cleared off the line by Dicoy Williams.

Harbour View's first effort on goal came in the 34th minute when Jermaine Hue struck a 25-yard free kick, which was well saved by Julian McLiesh.

Hue, however, did not end the match as he was ejected in the 87th minute.

The Stars of the East took the lead two minutes before half-time when André Steele chipped a ball into Arnett's box and Kavin Bryan, playing in his first match of the season, got to the ball before the out-rushing McLiesh and managed to score from an acute angle.

Hayles said: "The mid-season finals is quite important to us but the league is far more important, so these three points are very good. That final (End-of-Round) is really a bragging-rights final, but for the competition the most important thing and the main prize is that big trophy at the end of the day."

"We are going to reorganise and come again because we shouldn't have lost this game," Barnes said.

"We have to organise and make it come out right for the community and we need some wins to make the team blend; the team has not blended the right way as yet," he added.

Arnett are now in the relegation zone, as they remained on 21 points, one less than long-time cellar dwellers August Town which beat Humble Lions 1-0 to advance to 10th on 22 points. Village United are now last in the 12-team championship with 20 points.