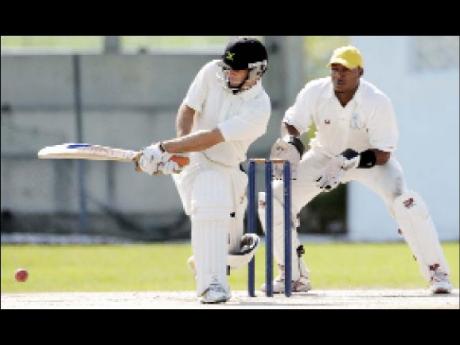 Jamaica's middle-order batsman Brendan Nash sweeps for runs during his unbeaten knock of 44, as wicketkeeper Lyndon James looks on, during play on the final day of their West Indies Cricket Board (WICB) Regional Four-day Championship match at Chedwin Park, yesterday. - Ricardo Makyn/Staff Photographer

Jamaica's captain Tamar Lambert was cool, calm and collected yesterday after witnessing his team secure a comfortable and predictable six-wicket win over the Windward Islands, in their first match of the new-look seven-round West Indies Cricket Board (WICB) Regional Four-day Championship at Chedwin Park.

Sporting a thick green sweater in chilly and windy conditions, Lambert, who is hoping to lead Jamaica to an unprecedented three titles in three seasons, was a picture of content and pride as his team, needing 78 runs to win with eight wickets in hand on the final day, did so approximately 35 minutes before lunch.

"It was a very good win for us. It's unfortunate that we lost four wickets, but all in all, I thought it was an efficient performance from day one," said Lambert.

The team will depart the island today for St Kitts and Nevis, where they will play the Leeward Islands in their second-round match this weekend.

"Hats off to Nikita Miller for giving us a very good start, and Wavell Hinds, who helped us consolidate that position, and the entire team which contributed at stages. It's a start that any captain would want and a start we hope to continue when we go to Nevis," he added.

Action, yesterday, began with opener Xavier Marshall, who was 10 not out overnight, and Tamar Lambert, taking the crease with the hope of being the ones to take Jamaica home.

Things didn't go the way of either batsman as Marshall, playing back to a Rawl Lewis delivery, was bowled for his overnight score in the third over of the day; and Lambert, playing back to an arm ball from off-spinner Shane Shillingford, was adjudged leg before wicket for 14, with the score on 38.

It was then left up to Brendan Nash and first-innings hero Hinds, who made 44 not out and 14, respectively, to guide Jamaica home.

"We are very disappointed with our performance. We were unable to concentrate for periods when we batted, and our bowling was inconsistent," said new Windward Islands captain Darren Sammy who, along with his teammates, will sit out the next round of the seven-round championship, after drawing a bye.

"I hope that everybody will go back home and work on their game, so that we can give ourselves a chance of remaining in contention for the title," he added.