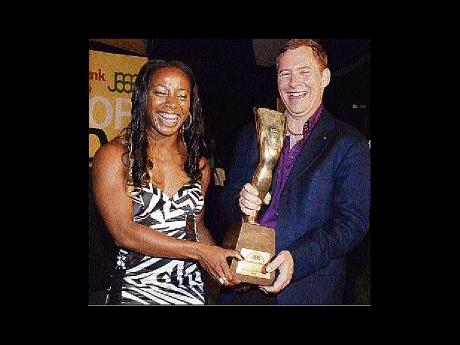 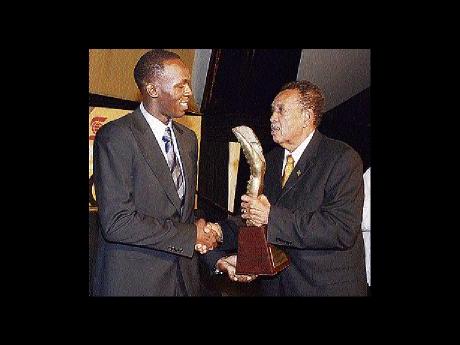 Left: Male Athlete of the Year Usain Bolt (left) is presented with his Golden Cleats Award by president of the Jamaica Amateur Athletic Association, Howard Aris, at the presentation ceremony at Jamaica House last Friday.
Right:
Shelly-Ann Fraser, the Female Athlete of the Year, is presented with her Golden Cleats Award by Scotiabank President Bruce Bowen. - photos by Colin Hamilton/Freelance Photographer

Triple Olympic and World Championships gold medallist, Usain Bolt, has placed greater value on earning the Golden Cleats Male Athlete of the Year Award for 2009 than other accolades he has won internationally.

Bolt and Shelly-Ann Fraser, the Olympic and World Championships 100m gold medal winner, won the respective Male and Female Athlete of the Year Awards at the Scotiabank-sponsored function, which was held at Jamaica House last Friday.

Bolt, who had been recognised with the Male Athlete of the Year Award by the the International Association of Athletics Federations, Track & Field News Magazine, the International Sports Journalists Association, among others, said he cherishes the honour bestowed on him by his countrymen most.

Asked which of the awards means more to him, Bolt said: "To me, it's your country because when you are honoured by your countrymen for being the greatest athlete, for me, it's always a (great) honour."

"I always enjoy getting awards from Jamaica," added Bolt, who was voted The Gleaner Man of the Year and BBC Overseas Personality of the Year, both for two successive years.

Bolt, 23, retained his position as the world's leading sprinter by shattering both his 100 and 200 metres world records with incredible times at the World Championships in Germany in August. The fastest man in the world ran 9.58 seconds in the 100m and 19.19 seconds in the 200m in Berlin.

Fraser, who like Bolt repeated her 100m gold medal success at the World Champs last summer, earned the Golden Cleats' Female Athlete of the Year Award.

The diminutive sprinter won the award ahead of MVP and Jamaica teammates Brigitte Foster-Hylton (100mH) and Melaine Walker (400mH), both of whom also won gold in Berlin.

"I am feeling good, as anybody else would feel to be recognised," said Fraser. "If Melaine or Brigitte had won, I would have felt the same for them because I train with them, so I know the hard work that they put in," she added, noting that training for the 2010 season is going great.

In a bid to raise $1.5 million for needy equipment for the association, the Scotiabank-sponsored event sold tickets for $7,000 each and Aris was pleased with the turnout.

"We are very thankful for the turnout this evening and we hope that those sponsors who have been here for us over the years and are here tonight for the first time, together we will able to ensure that this country over the years will continue to be very proud of the performance and performances of our athletes."

He added: "Track and field has done this country proud for many years and history is replete with examples of our achievements."

Scotiabank CEO, Bruce Bowen, who talked about Jamaica's impressive showing over the years, believes like his institution, the JAAA has a legacy to protect and nourish.

"At Scotiabank Group, after 120 years in Jamaica, we believe we know something about legacy as well and when we decided to partner JAAA with the event, it was based upon a vision of excellence and a vision of that legacy," he said.

"And so tonight, it's not only about honouring the exceptional performance of our athletes - both present and past - but it's also looking towards the future and the money that will be raised this evening will go towards training equipment to ensure that legacy continues."