Maxwell's focus on 'the bigger picture' 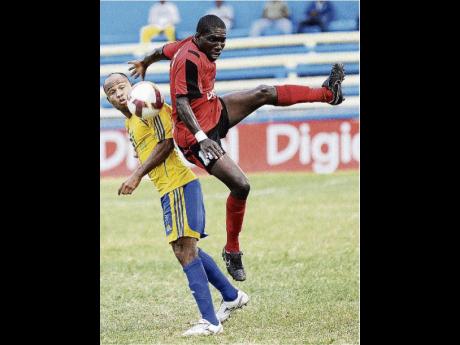 KEVIN LAMEY scored an 80th-minute beauty, 14 minutes after coming on as a second-half substitute, to give Waterhouse a 1-0 win over Boys' Town. The win moved his team past champions Tivoli Gardens and second in the overall standings - three points behind Harbour View who they will face in the second-round final.

However, coach Geoffrey Maxwell wasn't going to let his Drewsland men get off the hook after watching Boys' Town go close to scoring on at least three occasions Sunday night in their last second-round match of the Digicel Premier League.

Maxwell said apart from the first 30 minutes and Lamey's strike from atop the box, Waterhouse were "flat" and last Wednesday's 0-1 loss to then cellar-dwellers August Town was a better performance than Sunday's win over fourth-place Boys' Town.

He totally dismissed the fact that Waterhouse were early second-round final qualifiers, saying, "the bigger picture is the Premier League".

"They seemed to have been more motivated against August Town because making the second-round final was at stake, but you don't get points for winning those games," he said.

Maxwell picked out Jonathan Williams - paired up front with Jermaine Anderson for yesterday's match - after he botched a one-on-one with Boys' Town goalie Kirk Porter in the 33rd minute.

Williams dummied the advancing goalie near the penalty spot and was teeing up a shot with his right foot when Porter recovered and stole the ball.

Boys' Town were kept in check for the first 30 minutes by an aggressive Waterhouse, who picked up three yellow cards in the first 28 minutes.

However, Boys' Town took charge of the second-half, almost immediately after the resumption when Kemar Thomas cleared off the line in the 50th and goalie Richard McCallum was called on to save Vernal's shot seconds later.

Boys' Town were still looking better for much of the second-half but their forwards were not arriving in time to meet crosses.

Maxwell called off Anderson in the 66th minute. Earlier the coach had watched his only chance, a first-minute overhead kick, go over the bar.

He got the desired effect when Anderson's replacement, Lamey, pounced one-time on a clearance which came straight at him.

Lamey's shot had enough precision, pace and height to freeze Porter as it flew through a packed penalty area and lodged into the net, much to the bewilderment of the Boys' Town goalie.

It was the Waterhouse striker's 12th goal of the season, two behind Rivoli's Devon Hodges, who scored in his team's 1-2 loss to Sporting Central.

The home fans might have been grateful for Lamey, their proven trump card, but Maxwell said Waterhouse would have to step up their game.

"Overall, to me, we need to have a serious talk," added Maxwell, who came under intense media pressure at the start of the season after Waterhouse had lost their first five games of the season - one being a 1-1 draw which turned into a 0-3 loss in the Jamaica Football Federation's boardroom due to an ineligible player.