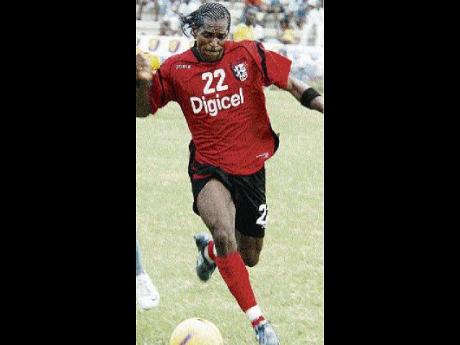 Davis hopes to lead by example for Arnett.

Davis, who won a Premier League championship with the club as player; and has been the player/coach of the team since the first round last season, made his decision public by a letter emailed to the media on Sunday night.

This followed the team's 1-0 defeat to Harbour View Football Club on Sunday, which left them in the relegation zone in 11th position on 21 points.

"This letter is to inform the media, the public and the Arnett Gardens community that I am hereby resigning from my position as coach of Arnett Gardens Football Club," Davis, a former national senior player, said.

Davis' resignation is not surprising as it comes amid a recent move which saw him being displaced as coach and asked to play over a three-match span.

On Sunday, he was not a member of the Arnett squad at Harbour View and watched part of the game from the stands.

Davis went on to explain contrasting philosophies which appear to have affected his decision.

"When I was offered the job of player/coach of Arnett Gardens, I saw it as my mandate to transition the team and groom a younger unit of players for the future prosperity of the club. I was able to achieve that in the latter part of last season with players like Newton Sterling, Desmond Breakenridge and Kevin King,"

He added: "Transitioning the club to a younger set of players was not necessarily the vision of certain members of the management team, and so carrying out my duties became increasingly difficult over the months.

"The task of coaching had put a strain on my playing time as I needed to fully concentrate on the team in my capacity as player/coach. The management team did not see eye to eye with this decision either as they thought I should have played a more active role on the playing field."

Continuing, Davis explained: "Much of what transpired in the second round of this season has played out in the media, but to be clear, I became injured after the first match under the new panel of coaches and was asked to assume coaching duties for the game against Humble Lions even though I was not involved in preparing the team,so I complied on match day.

"Given the comments of some members of the management team in the media following that game, I decided that it was time for me to depart from my role as coach at the club."

He said he resigned on December 29, but that move was rejected by the club's chairman. Now, he has changed his mind.

"I consider the recent spate of management changes at the club to be poorly and unprofessionally handled," he said.

Davis, though, said he was willing to continue serving the club as a player.

"As a professional, I am once again prepared to give 100 per cent to the Arnett Gardens Football Club and community on the playing pitch for the duration of this season," he said.