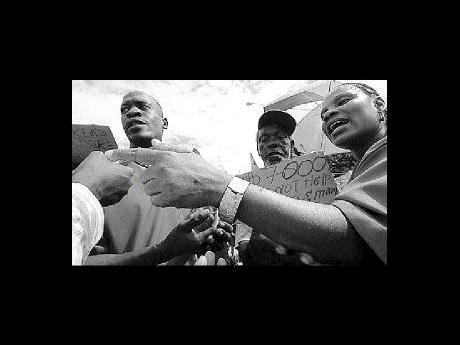 In ths November 2007 file photo, Porters and ancillary workers at the Bustamante Childrens Hospital protesting outside of the gates of the institution. - Ricardo Makyn/Staff Photographer

THE JAMAICA Productivity Centre (JPC) launched its inaugural annual Productivity Summary Report in November last year. The report covers the period 1972-2007. Subsequent reports will cover the most recent five-year periods. The JPC wishes to publicly acknowledge the Statistical Institute of Jamaica (STATIN) for providing the primary data required for the report.

The productivity of the Jamaican worker, that is, the output per worker, has declined, on average, by 1.3 per cent per annum between 1972 and 2007. This means the average worker in Jamaica has been producing less, each year, over the period.

The wealth created by those involved in production must be shared with others in the population who are too young, too old, or for other reasons, are unable to participate in the production process. Over the period 1972-2007, the population has grown. This, combined with a declining output from the average worker, implies that the amount of wealth enjoyed by the average citizen has fallen, that is, the average Jamaican is poorer in 2007 than he/she was in 1972.

While labour productivity in Jamaica has been on the decline over the last three decades, many of our Latin American and Caribbean neighbours have experienced labour-productivity growth averaging more than 1.5 per cent per annum over the same period.

In the five-year period, 2003-2007, labour-productivity growth in Latin America and the Caribbean have accelerated to over two per cent per annum, while the output produced by a Jamaican worker declined by 1.8 per cent, on average. Over time, this has led to a widening of the labour-productivity gap and, in fact, some countries in the Caribbean such as St Lucia, that were behind Jamaica in labour productivity as late as 2002, are now ahead and moving even farther. Given the relationship between labour productivity and standard of living, this means the average citizen in the English-speaking Caribbean, over the period 2003-2007, was becoming richer than his/her Jamaican counterpart.

The report discusses labour productivity in the following eight sectors: (i) Agriculture, Forestry and Fishing; (ii) Mining and Quarrying; (iii) Manufacturing; (iv) Construction and installation; (v) Electricity, gas and water; (vi) Wholesale and retail, Hotels and restaurant; (vii) Transport, storage and communication; (viii) Financing, insurance, real estate and business services. Mining and quarrying had the highest labour productivity level followed by electricity, gas and water. The lowest levels were recorded in agriculture, forestry and fishing. During the last five years of the report, all eight sectors experienced declines in labour productivity. The largest declines occurred in mining and wuarrying (-12%); agriculture, forestry and fishing (-2.8%); and construction and installation (-2.4%).

The performance of the mining and wuarrying sector may seem surprising given the investment made in the bauxite sector over the period considered, but it should be noted that the sector includes the labour-intensive quarrying industry. The least decline of zero per cent per annum over the same period was observed in the manu-facturing sector. It should also be noted that construction and installation was the only sector in which labour productivity declined in all the five-year periods examined.

In 2007, the three sectors with the lowest productivity levels were wholesale and retail, hotels and restaurant services, construction and installation, and agriculture, forestry and fishing. Interestingly, these sectors accounted for approximately 72 per cent of total employment in the eight sectors.

It is quite clear that a prosperous future for each Jamaican and that of future generations depends on the reverse of the observed trends in labour productivity. This will, among other things, require a move towards higher wealth-creating activities. Two very important factors affecting labour productivity are: the amount of capital (nature and type of tools) each worker uses and the education and skill levels of the average Jamaican worker. All players in the economy have a role to play and the time to act is now.

For the full text of the JPC's indicators report please visit www.npaw2009.com/indicators. The Jamaica Productivity Centre is the national organisation responsible for promoting and facilitating productivity enhancement at the national, sectoral, industry and enterprise levels.