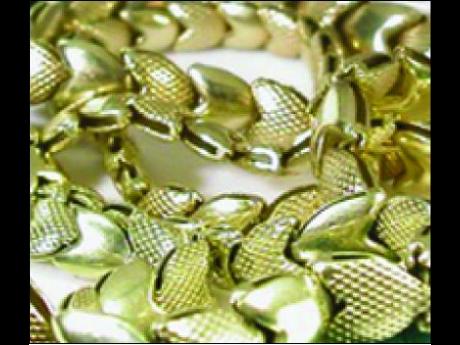 IT'S UNCLEAR where they are from and who they represent but since the start of the year they have descended on Ocho Rios almost with a vengeance.

Youth, shouting "Cash fi gold!" and offering the seemingly hefty price of between $12,000 and $14,000 per ounce for gold, have become the norm in this resort town.

The price, though attractive, pales in comparison to world prices which stand at around US$1,139 (over J$100,000) per ounce for the precious metal.

It is unsure where the gold will end up but one buyer says it will be used for making jewellery.

"We melt it and use it mek other things," said one youth, pointing to a chain around his neck.

They have come armed with their hand-held mini digital scales to weigh the product, and their testing devices.

"Twelve thousand dollars a ounce!" one buyer from a group of four shouted at persons passing by.

They, along with several others, can be seen each day on the streets of Ocho Rios amid the hustle and bustle with their trays displaying several $1,000 bills, their scales and their purchases for the day.

They buy rings, chains, bangles, bracelets, watches, earrings and any item with a touch of gold.

So popular has the effort become that even on weekends the youth are at it in outlying communities.

"Sunday I was at home in Content Gardens (Ocho Rios) and I heard one of them passing my gate shouting 'cash fi gold!'" one female resident told The Gleaner.

It is unclear what the response has been to the effort but since recently the number of sellers has increased especially over the Christmas period, when there was just one vocal buyer, to around a dozen, this week.