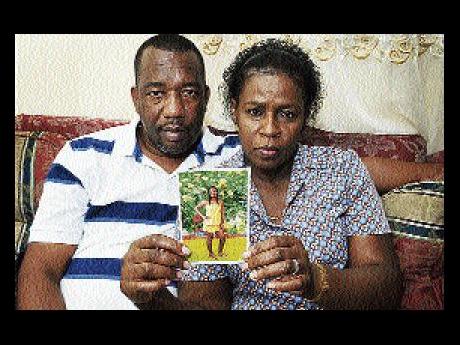 Sandra Johnson and Peter Simpson, guardians of Chevelle Morris, hold a picture of the 23-year-old who was killed by gunmen while sitting in a minibus on Friday.

FATE SOMETIMES presents a series of unfortunate events for the human race.

Last Friday 23-year-old Chevelle Morris was dealt one of these when she was killed on her way from downtown Kingston to her community of Duhaney Park in St Andrew. Chevelle, who is described by her family and friends as a pleasant, ambitious young lady, had just completed some business when she decided to board a number 35 bus, which plies the downtown Kingston-to-Duhaney Park route.

Chevelle, who has an associate degree from Duffs Business College, sat in the front of the Toyota minibus between the driver and another female passenger. When the bus had finished loading, it had 15 passengers and made its way along its customary route to Duhaney Park by way of Spanish Town Road. As she sat in the front of the vehicle, unknown to her, two young men were robbing the conductor. The men quietly completed their illegal task and asked for a stop at the entrance of Seaview Gardens.

The conductor then signalled for his driver to stop so that he could see where the men were going. It was then that Chevelle's world came crashing to a final, crushing halt.

The gunmen seeing the vehicle not moving reportedly fired a single shot in the direction of the bus. That single shot entered her skull and exited through her mouth.

That single shot has left her family both in Duhaney Park and Orange Park district in St Ann in deep sorrow. Her guardian, Peter Simpson, says that the killing has robbed Jamaica of another promising and productive citizen while emboldening criminals who contribute nothing but destruction.

"It is a big loss in terms of how it happened. It is sad to know that these waste elements who walk around and kill people and go free and don't care about nothing. It is hard and we need to realise that the society is deteriorating," he said.

One of her close friends, who declined to give her name, described the killing as senseless and 'stupid'.

"She was always smiling, always cheerful. I didn't sleep the whole night when I heard; I was devastated. It (the killing) is dumb and stupid. People are acting crazy over money and they turn back and shoot her. It is heartless," she said.

Simpson is hoping that the men are caught and that information is forthcoming. The police have already told him they have some leads and a description of the persons.

"All the time I would watch the news and I would see it happen to other people and now that the shoe is on my foot, it is hard," he said.