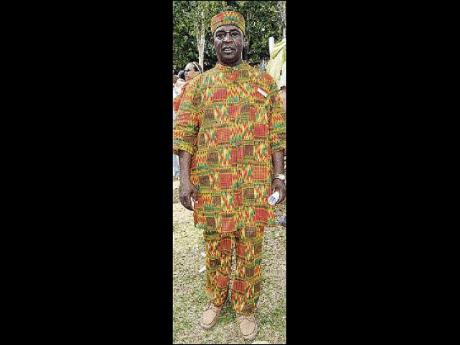 COLONEL OF the Accompong Maroons, Ferron Williams, has said there will be no more downtown market layout for future Accompong celebrations, as the practice is taking away from the authenti-city of the festivities, and community-tourism thrust Maroons are pushing for.

"People do not come here to buy clothes or shoes. They come to Accompong on January 6, to journey through our history and customs," Colonel Williams told The Gleaner in an interview during the 272nd annual Accompong Maroon Celebrations in Accompong Town, St Elizabeth, on January 6.

"Moving forward, we will not be having anything of this sort (market layout). I have to admit that this year there were those things on the road, but in 2011 that will not continue. What we want to have is the sale of items that are indigenous to our roots," he insisted.

A walk along the main road in Accompong town, on the most important day in the community's history, showcased several vendors and pedlars parading clothes, shoes, synthetic hair and accessories - something that has irked the Maroon chief.

Nevertheless, the 2010 celebrations saw marked improvement in terms of the flow of activities throughout the day and during the night. As usual, persons from England, Canada, the United States and even Kenya attended the major calendar event in St Elizabeth.

As a measure to raise funds towards the community's development, each visitor had to pay an admission fee to enter the venue, which was not a feature of previous celebrations.

Colonel Williams said some of the gate receipts would be used to fund a new education initiative, and some to partially finance the education of students preparing for the Grade Six and Nine Achievement Tests.

The annual Accompong Maroon celebrations is held on January 6 to commemorate the birthday of former Maroon leader Cudjoe.

Cudjoe fought with the British for decades before signing a peace treaty in 1738.

The celebration begins with the blowing of the abeng, summoning all the Maroons to assemble like they did more than 250 years ago. The abeng is an old powder horn adapted from its use for carrying musket powder to an instrument used to communicate with Maroons over many miles in the Cockpit terrain.