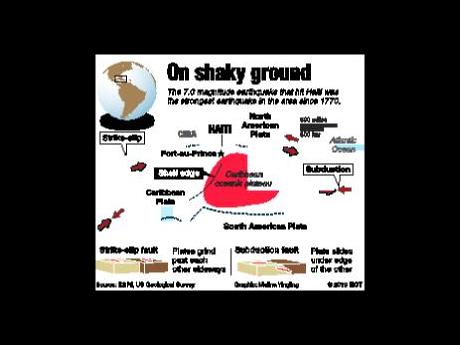 Information out of the devastated island was hard to come by, with all communication facilities down, but the generosity of Jamaicans was ready to be unleashed.

It was a day when the shock of Tuesday's horror still lingered.

Minister of Information Daryl Vaz said a significant number of the large, hard-nosed business entities rallied to support Haiti with critical supplies in the aftermath of the quake.

The information minister said a bank account number 212 387 304 has been opened in all branches of the National Commercial Bank to facilitate public contributions.

Additionally, a video board is to be set up in Half-Way Tree Square, aimed at highlighting the crisis in Haiti.

Jamaica House scurried to make plans for Prime Minister Bruce Golding and a team to fly to Haiti today, on the heels of a Jamaica Defence Force (JDF) vessel transporting 150 soldiers, as well as supplies, to Haiti.

Vaz said the 150 JDF personnel, armed with technical expertise in a variety of areas, would be parti-cipating in the search-and-rescue mission, the paramount exercise at this stage.

"The prime minister will meet first hand with the president of Haiti," disclosed Vaz, who will also be part of the delegation to Haiti.

Vaz said the Government was also trying to account for Jamaicans who might be trapped in Haiti.

He disclosed that members of a team from the Jamaica Civil Aviation Authority were all accounted for.

But even as the Jamaican Government and others prepare to assist the earthquake-ravaged country, it is energetically putting in place strategies to deal with an expected influx of refugees from that country.

Minister of National Security Dwight Nelson met early yesterday with Chief of Staff of the Jamaica Defence Force, Major General Stewart Saunders, and Owen Ellington, acting police commissioner, who briefed him on the plans being undertaken by the two entities.

Roman Catholic Archbishop of Haiti, Joseph Miot, 63, was found in the ruins of his office.

Hedi Annabi, a Tunisian diplomat and head of the UN peacekeeping mission in Haiti.

Kely Bastien, president of the Senate in Haiti.