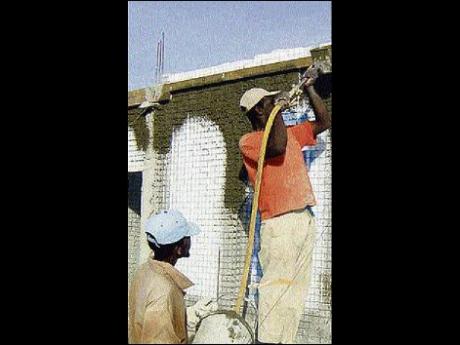 A shot of a local construction site. - File

ALREADY BURDENED by harsh economic times and increased taxes, Jamaicans seeking construction services might have to brace for more increases as the Joint Industrial Council (JIC) for the building and construction industry has advised that there might be a spike in construction costs later this year.

Suggesting that the increases would be a small price to pay for the safety of workers, the council noted that the spike in costs might ride into the industry on the back of requirements outlined in the new Safety Manual for the Building and Construction Industry.

"The compliance to such a manual may result in increases in construction costs, but these costs will be minimal compared to the possibility of loss of life and limb," the council noted in a release issued yesterday.

However, the umbrella organisation was hoping that the improved safety practices would eventually translate into reduced insurance costs.

Lavada Carruthers, secretary manager of the IMAJ, told our news team that all contractors were required to implement the measures outlined in the manual. "Failure to comply is a breach of the Factories Act and other labour laws," Carruthers warned. She pointed out that some contractors might not be up to speed with the dictates of the safety manual and would have to find the capital to become compliant. This cost, she said, might be passed on to the consumers.

Carruthers also pointed out that employees should ensure that they peruse the safety manual and insist that employers provide the required safety gear, including, but not limited to, hard hats and protective boots.

The safety manual has been in the making for the past two years and is a collaborative effort with input from the unions and the Ministry of Labour.

The JIC also stated that the manual seeks to encourage professionalism in the construction industry and safety on construction sites and that it forms part of the Labour Management Agreement for 2009-2011.

"The manual meets the requirements of the impending Occupational Safety and Health Act, and all requirements meet current international standards," JIC noted.