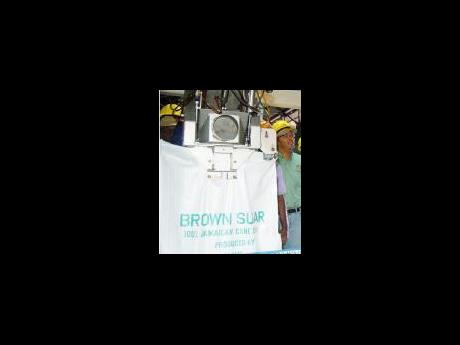 Brown sugar being bagged at the Frome factory in Westmoreland, December 9, 2009. - Photo by Dalton Laing

Jamaica will ship the first batch of raw sugar to Eridania Suisse SA on February 28, representing close to a third of the supplies committed under a forward contract with the Italian-owned operation.

"We expect to ship about 22,000 to 24,000 tonnes in our first shipment, and we are confident that we will deliver on our commitment," said John Gayle, general manager of SCJ Holdings Limited.

"Presently we are on target, and we did prepare our schedule (to deal) with any vagaries in weather or unexpected situation that could affect us."

Gayle's assurance is set against the background of troubles at the Frome estate, which is to produce 43,000 tonnes of the 79,000 tonnes committed to Eridania from the current crop.

Production at Frome was suspended last week to allow waterlogged cane fields to drain in order to reap the best quality cane from the Westmoreland fields. Reaping is expected to resume today, January 15.

Monymusk, whose target is 37,000 tonnes of sugar, was commissioned into service just as Frome was ramping down, but the timing was not enough to silence the whispers of potential problems with completing Eridania's order as the crop season progresses.

Frome, up to Christmas, had only done 4,800 tonnes of sugar before the rains.

Jamaica, however, would have recourse to the production of private farmers. As the marketing of sugar is currently configured, producers sell their output into a pool overseen by state-owned Jamaica Cane Product Sales, which is responsible for exporting the sweetener.

The Financial Gleaner could not immediately confirm with new owners of Trelawny factories - Long Pond and Hampden and Duckenfield in St Thomas - whose factories are just re-entering the market, whether they would fall into that structure.

"We will deliver," Gayle reiterated.

Eridania is buying the sugar at €335 per tonne, and has already paid down US$15 million on the order.

It will share with the Government of Jamaica any profit made on the final sale of the product.