Does January bring the shakes? 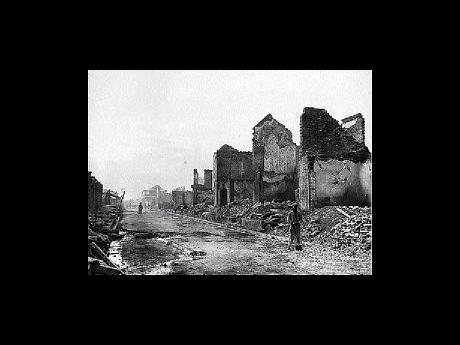 Tower Street on January 14, 1907. - Photo courtesy of the National Library of Jamaica

As hapless Haiti continues to reel from the catastrophic 7.0 earthquake which has claimed an estimated thousands of lives and flattened infrastructure, a question that comes readily to mind is: what is it about January and the region when it comes to earthquakes?

The 1907 earthquake which rocked Kingston and Port Royal took place on January - the 14th to be exact.

Yesterday marked the 103rd anniversary of the unbridled terror that claimed the lives of over 800 Jamaicans.

At 3:32 p.m. the city of Kingston was bustling, all was alive and well," declared The Gleaner in a feature piece on the earthquake.

"Suddenly, there came the sound of a rushing, mighty wind, followed by the sound of a train roaring in a tunnel and the violent shaking of the earth so that men and buildings were tossed about like puppets.

"Screams split the air. Within 10-20 seconds, a town of 46,000 had been rendered immobile hundreds lay dead or dying, buried beneath mounds of rubble and dust," The Gleaner reported.

"By 3:33 p.m. three shocks had been felt and every building in Kingston sustained some damage; many in the lower part of the city were destroyed."

Dorothy Kew, a Jamaican who had family members who perished in the disaster, wrote that the great quake fascinated her.

Said Kew who now resides in Canada: "The event fascinates me, not just because my family experienced it, but because it became more personal when I discovered that some family members had perished in the earthquake.

I am fortunate to have several postcards showing the devastation after the event.

Kew said growing up in Jamaica meant living with the dangers of two natural disasters - hurricanes and earthquakes.

Kew added: "Charlie was the worst disaster to hit Jamaica since the 1907 earthquake and did a great deal of damage."

And the 1907 earthquake was the worst disaster since the massive quake of 1692, which tamed Port Royal, robbing it of its unenviable status of being the 'Wicked City in the World'.

It is also the notable exception as the terrifying quake shook the infamous Port Royal on June 7.

It was January 13, 1993, that the last earthquake of some significance was felt.

In keeping with one of its most frightful traits, the earthquake hit Jamaica without warning.

Vulnerability of Kingston to seismic shaking was amply demonstrated by the magnitude 5.4 temblor.

It was described as a 'moderate' shock with its epicentre located near the Silver Hill Peak in Portland, some 15km north-east of the Half-Way Tree Clock Tower, but the effects were felt across an area of approximately 500 square kilometres.

Three lives were lost as a result of the quake.

Jamaicans felt buildings trembling on Tuesday and were jolted into temporary silence until news broke that the island had been spared the onslaught of the horror, but alas, not Haiti.

The Gleaner reported yesterday that approximately 80 earthquakes between strengths of 2.4 and the catastrophic 7.0 rocked different areas of the Caribbean over the past week.

Just what is it about January and earthquakes in the region?