Americans have some way to go - Greene 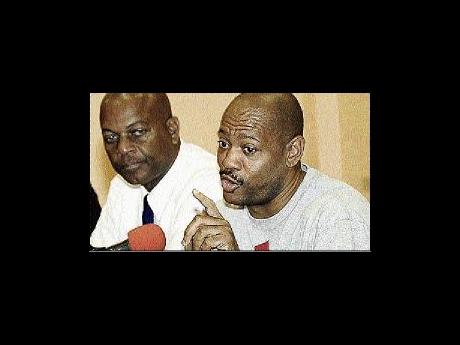 American Maurice Greene makes a point during the Douglas Forrest Invitational press briefing which was held yesterday at the Insports boardroom. Looking on is meet chairman Brian Smith. - Ian Allen/Photographer

Five-time world champion and Sydney 2000 Olympic 100 metres gold medallist, Maurice Greene, believes that American men have some way to go before they will be able to compete with Jamaica in the sprints.

Greene, who is in the island as a special guest of the organisers of tomorrow's Douglas Forrest Invitational track meet which is set for the National Stadium, said yesterday that there was only one American male sprinter, 2007 World 100m and 200m champion Tyson Gay, who has the potential, at the moment, to match the Jamaicans.

He said local runners would dominate any United States (US) versus Jamaica sprint challenge. "I, personally, wouldn't want to be in that right now because you all would dominate most of the events, but it will bring a lot of excitement and that is always good," Greene said.

In saying it will take a number of years before the US can compete with Jamaica in the sprints, Greene said there is no one to challenge Usain Bolt.

He added: "(We are looking at) ... at least five, six years because you have Usain (Bolt), and who knows how long he is going to run? We are going to have to compete against that monster (Usain) for a while, and I don't really see anyone in the US at this time other than Tyson (Gay) that is going to step up and compete against him. That's why we need to do something with our youth in America. We have to do something to bring them along, to help them out."

Return to the top

The Athens Olympics 100m gold medallist, Justin Gatlin, recently vowed to return to the top of male sprinting after completing his four-year doping ban, but his compatriot Greene does not hold out much hope for that happening.

"Personally, no," Greene said. "He has been out for way too long, four years is a very long time not to compete. He has a tremendous mountain up against him and the times that these guys are running now, he wasn't running these times when he was there. Personally, I would say, what's the point? You should just live your glory days and sit back and watch, like me."