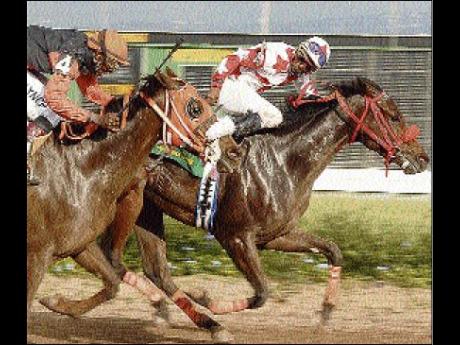 SIR ARCHIBALD (right), with Paul Francis up, holding off DANIELLE MY GIRL (Clive Lynch) to win last Saturday's Millard Ziadie Cup over 1100 metres at Caymanas Park. The winner, a 7-1 shot, is owned and trained by Delroy Wisdom. - Colin Hamilton/Freelance Photographer

Both the Pick-9 and Super-6 start anew at Caymanas Park tomorrow.

With SIR ARCHIBALD at 7-1 in the Millard Ziadie Cup feature scoring the only upset last Saturday, the Pick-9 was caught by three punters - each receiving $333,333.50.

Tomorrow's Pick-9 will embrace races two to 10; the Super-6 from five to 10. We look at the Super-6 which commences with a straightfive race for native and imported three-year-olds (non-winners of three), to be contested by nine starters.

Among them is hot ante-post favourite DIABOLICAL KID, who won impressively over the course on December 19 ahead of stable companion SATAN'S RULE, who renews rivalry.

From the stables of champion trainer Wayne DaCosta, the speedy American-bred 5-y-o horse, to be ridden by champion jockey Omar Walker, won in the good time of 59.1, and having moved exceptionally well at exercise since (58.3 from the gate, last four in 45.3), should lead home MR ZIP and SATAN'S RULE.

DaCosta and Walker should successfully team up again in the sixth race for maiden three-year-olds over 1300 metres with the improving GOLDEN HARVEST.

Owned by former government minister Derrick Smith, the lightly raced three-year-old gelding failed by a short head to catch the fleet-footed FLINTSTONE over 1100 metres on January 2, and given the additional 200 metres of this race, should make no mistake in the 15-strong field.

SALUTE TO MOM, ALEXIS, HACKLETON and GABIWITZO also have good claims, but with GOLDEN HARVEST looking the part at exercise in his preparation, the Region Of Merit-That's My Girl offspring should stave off SALUTE TO MOM, who was a fast-finishing third to SOCA PARTY over 1200 metres recently.

SERGEANT STONEHAN, now dropped in class after figuring prominently for a long way behind LADY WALES over 1500 metres on January 2, looks the one to beat in the seventh race over 1820 metres.

The four-year-old gelding from the stables of Dennis Lee has tumbled three classes to face six opponents, and having notched his last win over this trip some months ago, should prove too good for MISS ROSE and MR BUTCHER.

The Wayne DaCosta-trained HEART OF GOLD, a woefully unlucky loser in The New Year's Day Trophy, when failing by a nose to catch CLASSIC BEAU over 1300 metres, should give the champion jockey another winner in the eighth race over 1200 metres.

HEART OF GOLD has looked razor sharp at exercise, and this sparingly raced five-year-old mare, who finished third in both the Guineas and Oaks in 2008, should prove two strong for bold front-runner LAWS OF THE CAT in the closing stages.

It should be DaCosta and Walker again with the American filly SKITTLE QUEEN, a recent winner, in the ninth over 1400 metres, while the down-in-class pair of LATIN KING and BDELLIUM should fight out the finish of the closing $180,000 claiming race, the Track Price Plus Dig-Out Handicap over 1500 metres.