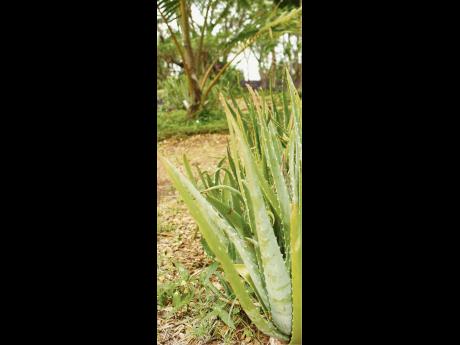 Almost every home has aloe vera growing without any attention, yet it is rarely used as part of a health regime. The versatility of aloe vera, with anti-inflammatory, antibacterial and antiviral, energy-giving properties makes it nature's gift to health.

A member of the lily family, aloe vera derives its name from the Arabic word 'alloeh' which means 'bitter'. There are over 200 varieties of aloe vera growing in Africa, Europe, Asia and the Americas. The plant has long, spiked leaves with a thick skin which contains a clear gel. The beauty of the plant lends itself to being placed in a pot and gracefully adding life on kitchen's windowsill.

Aloe vera has been used for more than 3,500 years to treat the skin, heal infections and burns. So treasured was the non-narcotic aloe vera in 332 BC that it caused a war. When Alexander the Great conquered Egypt, he learned of the amazing powers of aloe in healing wounds. The plants were on an island off Somalia, so Alexander sent an army to seize the island and the plant, to deny his enemies the use of this powerful healer.

Aloe vera dries into a natural bandage to promote the healing of wounds and help prevent infections. It is said that Cleopatra, as early as 30 BC, used the gel on her skin to keep it younger-looking.

It is believed that the Egyptians used aloe vera in embalming bodies. Early hunters used it to reduce perspiration. Ancient Chinese medicine used aloe vera gel for treating eczema and other skin infections.

Several scientific studies have investigated the effects of aloe vera and shown its effects across a wide section of ailments. The efficacy of aloe vera is bound up in 15 different compound groups of nutrients.

Aloe vera is rich in vitamin C which boosts the immune system and helps to maintain tone of blood vessels and promotes good circulation. Aloe vera also contains protein, calcium, magnesium, zinc, vitamins A, B12, E and essential fatty acids. Aloe vera is a plant source of vitamin B12. It provides enzymatic action to rejuvenate ageing tissues and promotes healthy skin. Aloe vera has the potential to help adults and children receive more from daily foods and supplements.

What Aloe can do

Cleanse the body: Probably, the most-known use of aloe vera is as a body cleanser for the stomach, liver, kidneys, spleen, bladder and colon. It has been known to provide relief for indigestion, stomach distress and ulcers. Persons suffering from bladder and kidney infections have claimed relief from drinking aloe vera.

Boost the immune system: Acemannan in the aloe vera is being investigated for its effects in boosting T-lymphocyte cells for the immune system. In 1994, the United States Food and Drug Administration approved aloe vera for the treatment of HIV. Ongoing studies worldwide show that aloe taken in highly concentrated doses can stimulate the production of white blood cells that may help fight viruses and tumours.

Improve skin: Aloe vera gel is used to treat first-degree burns, to shrink warts, reduce the pain of shingles and the symptoms of psoriasis. The plant also eases discomfort of rash caused by poison ivy and other plants. According to WorldwideHealth.com, aloe vera contains magnesium lactate, an itch inhibitor, in minerals in the plant. The gel has been effective in treating facial edema.

Treat ulcers and heartburn: European folk medicine has been used to treat heartburn and internal lesions caused by ulcers. The soothing benefits of aloe vera may also help with peptic ulcers, colitis and irritations of the digestive tract. The anti-inflammatory effects of fatty acids in aloe vera will alkalise acidic gastric juices to prevent over-acidity in the stomach.

Improve cardiovascular health: Researcher, Dr Om Prakash Agarwal has had success in administering aloe vera to his patients. He found a significant reduction in blood cholesterol, triglycerides, blood sugar and lipid fats. There was also an increase in HDL levels (good cholesterol) and significant lowering of LDL (bad cholesterol). (Angiology, The Journal of Vascular Diseases).

Detox: Aloe vera juice is used in detoxifying, cleansing the blood and it can ease constipation.

Several aloe vera cosmetic products on the market include lotions, creams, powders and soaps. Skincare products with aloe vera may be fortified with vitamin E and collagen to aid in maintaining the skin's elasticity and suppleness. Suntan lotions have anti-burning properties once aloe vera is added. Unless the products have significant amounts of aloe vera, the benefits would be minimal. Further, when stabilisers and preservatives are added, the benefits of aloe vera are reduced.

Advice should be sought before embarking on any regime using aloe vera. One may ask if it is safe to drink aloe vera every day without experiencing any side effects. My own experience indicates that there is no side effect from using small amounts, and this has been corroborated by researcher Jeremiah Herlby, PhD, of the University of San Antonio. His studies concluded that rather than negative side effects, daily consumption of aloe vera reduced many diseases including leukaemia, heart and kidney diseases.

The laxative benefit of aloe vera cannot be ignored. Aloe vera contains small amounts of the laxative compound found in aloe latex. If you develop cramps or begin to have diarrhoea, you should reduce the amount you take, gradually increasing the amounts until tolerance is achieved.

Aloe vera should not be taken by pregnant women as aloe can trigger uterine contractions.

If you are on diuretics or medication that may cause potassium loss, it is not advisable to take aloe vera.

To soothe burns, scalds, sunburn, heal wounds and help fight infection, select a lower leaf from a plant in your garden, cut off several inches, slice it lengthways, remove gel, apply and allow it to dry. Ensure that the wound is cleaned with soap and water before applying the gel.

Every plant has a place in the kitchen and aloe vera is no different. Some persons shudder at cooking something so slimy, but it is hardly any different from cooking okra. Cooking actually reduces the slime considerably, but it still has a slippery feel in the mouth.

For a great start to the morning and a light but healthy breakfast, try poached aloe vera on a bowl of plain yogurt with a bit of lime zest.

Peel off all the aloe's tough, bitter fibrous green skin. Chop the aloe gel into small cubes and add to a small saucepan along with the sugar and lime juice.

Cook the aloe over medium low heat until the liquid is no longer slimy, and the cubes have the texture of resilient grapes. Allow to cool, and serve over plain yogurt.