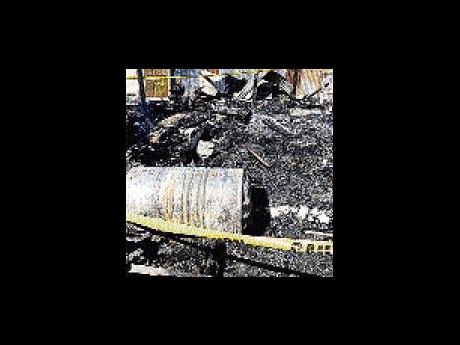 Remnants of the house where a mother and her child perished in a fire at her home on Marcus Garvey Drive in Kingston.

A 22-year-old woman and her three-year-old son are now dead following a fire at their house at 2 Marcus Garvey Drive in downtown Kingston early Friday morning.

While investigators are still trying to determine the cause of the two deaths, neighbours are charging that they were murdered.

The bodies of Mellisa Sutherland and her son, Stephen Cameron, were taken from the rubble of their one-bedroom house shortly before six yesterday morning after firefighters finally managed to put out the blaze.

Reports are that about 4:20 a.m. fire was seen coming from the premises located close to the bus park under construction on Marcus Garvey Drive.

An alarm was made but the house was devoured by the flames before firefighters arrived.

When the cooling-down operation was done, the bodies of the mother and child were found.

"It clear say she was beaten outside and then the body put back into the house and the building set alight," one resident told The Gleaner.

"Something must happen to the little boy, too, because him would shout if anybody attack him mother. Him was three but him bright (intelligent). A just Monday him start go the Carnival Basic School," another resident said.

According to the residents, Sutherland moved into the area a few years ago and told them that she grew up in Westmoreland with her grandfather and in Montego Bay, St James, with her mother.

"She have har ways, but she and nobody no have nutten and me no see why nobody should a deal wid har so," said the aunt of Sutherland's son.

"You know how long me and Mellisa nuh talk, but yesterday (Thursday) we talk and joke and me never know seh that would be the last time me and har would laugh," the woman added.

The police say they have not yet ruled out the possibility of a double homicide, even as their probe continues.