'I am stunned'- Foster-Hylton shocked at winning top sporting award 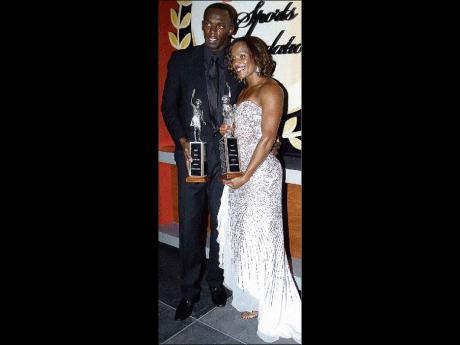 Usain Bolt and Brigitte Foster-Hylton pose with their respective Sportsman and Sportswoman of the Year Award at the RJR Sports Foundation presentation ceremony at The Jamaica Pegasus hotel in New Kingston on Thursday night. - Winston Sill/Freelance Photographer

The decision to name sprint hurdles world champion Brigitte Foster-Hylton as the RJR Sports Foundation Sportswoman of the Year came as a surprise to many, including the 34-year-old MVP track club veteran.

Foster-Hylton, who claimed the top podium spot at the World Championships in Athletics last summer, after speeding to 12.51 in the finals, was the selectors' favourite over Fraser, who secured the national record (10.73) en route to victory in the 100m, as well as helping the country to secure gold in the 4x100m relay; and Walker, who got the better of a lacklustre season to come out on top in the 400m hurdles event in a meet record time (52.42), the second-fastest time ever in the event.

An obviously surprised Foster-Hylton, who had won the award twice before - in 2002 and 2003 - was thankful for this latest success and paid tribute to the efforts of her compatriots, while highlighting that this award held special significance.

"This one is really a very touching one, it has a lot of sentiment and it brings back a lot of memories. It's been years of hard work and even though I have won this award twice before, this time, as they say, the hotter the battle, the sweeter the victory.

"It was a hot battle because I think Shelly-Ann and Melaine had done some very good performances over the year, so it was a tough decision," Foster-Hylton stated.

"Either way, I had an open mind to just come and enjoy the show, knowing that I had a great year but to top Melaine and Shelly-Ann, I am stunned.

"I had no idea (I would win). It had to be a difficult decision for the judges. I just want to thank everyone for supporting me in making my lifelong dream a reality," Foster-Hylton beamed.

There was no surprise when sprinting superstar Usain Bolt was named the Sportsman of the Year, after another all-conquering year on the track.

Bolt won the 100m (9.58) and 200m (19.19) events at the World Championships - both in record times - after lowering the marks he had established a year earlier at the Beijing Olympic Games. The livewire was also a member of the gold medal-winning sprint relay team, making him the obvious choice.

The Trelawny native thanked his main rivals for keeping him motivated and forcing him to work hard, and even had time to crack a joke at former American sprinter and world record holder Maurice Greene, who was also in attendance at the function.

Said Bolt: "Asafa (Powell) told me to tell you guys that it's because I was sitting beside him that I won.

"I just want to thank God for a wonderful season, a great season last year and also my management team, my friends, my family and even Asafa.

"All the guys really pushed hard this year and every season you just look forward to going out there and competing, and these guys really push you hard so that you have to stay focused," added Bolt.

"So, I'm still working hard and I know that Asafa is working hard, and Tyson (Gay) is also working hard and some other person (Greene) that I heard has been saying that they are coming back - I'm looking forward to an even greater season."

Foster Hylton and Bolt also walked away with the category awards for athletics, while Walker and West Indies cricket captain Chris Gayle were named respective runners-up in the Sportswoman and Sportsman of the Year categories.

Bolt's success continued with the 'People's Choice' Award, which was determined through pubic voting. He tallied 30 per cent of the votes, five more than the second-place individual, who was not named.

Former Gleaner Sports Editor, Lascelles 'Tony' Becca, was the recipient of the Chairman's Award for his contribution to the field. The award was presented by Chris Dehring, chairman of the RJR Sports Foundation.