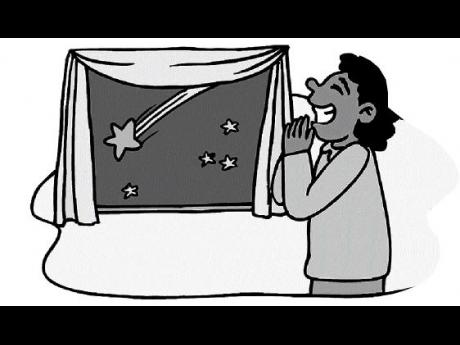 To the Creator, maker of man and animal, in this time of trials, tribulations and trysts, give me the faith to endure life on Earth, or what is left of it.

First and foremost, remind us to stop singing "Eternal Father bless our land", because the more we sing it, the more blood washes the land, and the dams are nearly empty, no water to clean up the gore.

Send us showers, not those of the colour green, though. Oranges we also want, but only those that grow on trees, please. And while you are at it, please give the greens and the oranges a sign; whatever it is, just give them a sign.

Please tell the 'bleachers' to stop expunging the melanin from their skin, for in these times of global warming they are going to need it to protect themselves from the elements.

It is imperative that you instruct 'man-a-yard' to impose a tax on stupidity because there is a lot of it in this country. There will be an avalanche of protests, but that's all right, more money for the government's coffers.

On that note, please whisper into L.A.L's ears and let him know that people are laughing at him the world over. Only you, my Creator, can let him understand that he is as talentless as they can be. Save him from himself, for it pains me to see how people in and out of the dancehall, near and far, are turning a brother into one big 'poppyshow'. If it is Your will, then it shall be done.

And, whenever there are street protests, I wish that there are more protesters than there are police standing by, lest the police get placards and start to demonstrate to save face.

Give me the courage to stop writing about Kanye West, who was snubbed by the Grammy Awards this time around in his major categories. But should he appear at that most 'revered' of awards show, and throw one of his puerile tantrums, I cannot guarantee that I will be silent on the matter.

Send the DJ-turned-novelist a good ghostwriter, editor and proofreader. The first effort was a literary disaster, and we can put our pot on the fire that the sophomore attempt will not be nominated for the Nobel Prize.

And oh, oh, oh, say to Santa Claus, his elves and reindeer that they are redundant. Christmas 2009 was their last. Barack and Michelle are in.

Happy New Year to my readers. I was going to say my millions of fans, but I am not L.A.L.