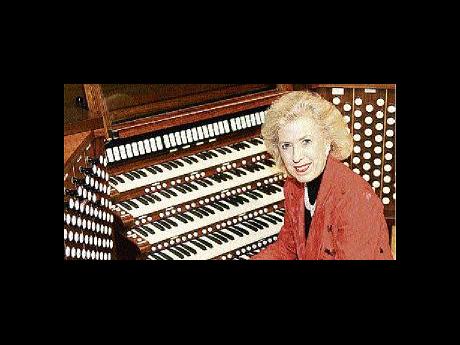 Diane Bish ... You understand more of the music that was written when you play it on the instrument it was made from. - Contributed

Close to 17 years on, Bish's status is unchanged and she is happy to be performing in Jamaica once again. Then, she said, "I'd heard a lot about Jamaica" and she got to know the people here in addition to doing the concert, enjoying the whole experience.

The cause is the same, as today Bish again plays in support of efforts to restore the Ward Theatre, and has settled on her programme for the concert, which will be just over an hour long. Bish told The Sunday Gleaner she will be playing Bach, Hayden, her preferred French composers, hymn arrangements and her own compositions.

Their Excellencies The Most Honourable Patrick Allen and Lady Allen are patrons of today's concert at the Stella Maris Church, Shortwood Road, St Andrew, starting at 5 p.m.

Bish's accolades are many and across a spectrum of the range of the instrument she has mastered. She records, composes, conducts, hosts the internationally televised programme, The Joy of Music, and has led the design of the Ruffatti organ, one of America's greatest.

She also worked with the Allen Organ Company's technicians and designers to create the Diane Bish Signature Series of digital organs.

With a 1989 National Citation from the National Federation of Music Clubs of America, Bish is in the rare company of musicians such as Leonard Bernstein, Irving Berlin and Fred Waring. Her expertise has allowed her access to record on some of the world's great organs and she told The Sunday Gleaner, "I like the historic type organs, mostly in Europe. The one Mozart played on and Bach played on, we have been able to play on these."

Playing the composers' work on the instruments they used has been a revelation for her. "You understand more of the music that was written when you play it on the instrument it was made from," she said.

Designing organs is a totally different experience from playing, she said, "but when you play as much as I do you get to know what sounds you like most and so it is easier for you to design an organ." While some may question the authenticity of a digital organ, Bish said "electronic organs these days are very, very good and they can match the sounds that pipe organs can make. They can replicate the sound in many cases."

In addition, they are less expensive, more compact and do not require as much maintenance. "I love pipe organs, but you need a very large pipe organ to do what a less-expensive digital organ will do," she said.

Her more recent performances have been in the Rockefeller chapel at the University of Chicago, in Washington DC, Nashville and Houston. Last year the Joy of Music series did a tour through Copenhagen, Helsinki, St Petersburg and Germany, those programmes in post-production phase.

Today's performance will not be a part of the television series and, unlike her previous Jamaican concert, Bish will not be using a soloist.

"I will just do everything myself. There will be something for everybody and it will show off the sounds of the organ," she promised.