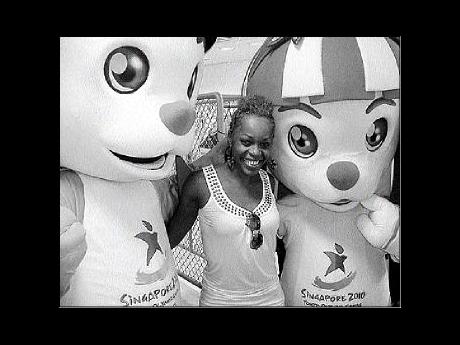 It took two calendar days for the Jamaican delegation which Aisha Davis was a part of to reach Singapore. Leaving Jamaica on Sunday, December 7, the team, including Minister of Culture, Youth and Sports Olivia Grange and sprinters Asafa Powell, Veronica Campbell and Dexter Lee, got to the Asian country on Tuesday morning.

This is, however, bearing in mind that Singapore, where the 2010 Youth Olympic Games will be held, is 13 hours ahead of Jamaica.

Then there was a packed schedule for everyone, including school visits. Davis and the other singers on the trip, Abijah and Mykal Roze, had the additional duty of carrying Reggae Night on the Friday of that week to tracks played by DJ Chris. There was also a local band, Bushman.

Long trip, packed days and all, Davis not only enjoyed the experience immensely but may soon find herself making the two-day trip to the destination again, as there are plans to organise a tour to the region with herself and Abijah. Plus, they may just be back to perform at the Youth Games.

On that Reggae Night concert, Davis said she did a 20-minute stint, which included Murder, My Life, Happy Days, Say My Name and a new song, Survivor, which is one of several songs recorded for her upcoming album.

The Sunday Gleaner asked if Survivor was a personal statement or culled from the experiences of others, and it turned out to be a combination of both.

"Personal statement. I am a born survivor, things that I have been through and stuff. And I incorporate other things that people go through," she said.

So the first part of Survivor is her own experience, though she does not go into specifics. There is a verse about being a single mother and trying to make it in a man's world (herself), as well as insight into the struggles of men - a single father who has been laid off, but is working hard with what he has. It is an actual situation she knows about.

"I made sure it was not just women being survivors. Everybody has their own crosses to bear and I am not sexist," Davis said.

Singapore may be special - the singers reportedly broke some ground for reggae out of Jamaica - but it is certainly not a new experience. Davis opened for and also did backing vocals for Alborosie on a 2008 European tour ("I love Europe," she says), doing sound system dub plates of Murder on the trip as well.

"The audience there is totally different from here. They are really into reggae," said Davis.

The performances included the "awesome" Rototom Sunsplash festival of that year.

She said, "I know the Jamaican audience can be hard", but reflects "I can't say I have ever experienced anyone standing up still just watching me perform".

There is a particular song, though, which she never got to perform anywhere - at least, not as it had been recorded. The 2003 remake of Someone Loves You Honey with Anthony B came with a high quality video. However, Davis told The Sunday Gleaner that she never performed the song with Anthony B, saying that if it had got that performance push "it would have gone further".

Going further in Jamaica often means being on particular shows which have limited female input. Davis said that most events are dancehall oriented and present only a few women, the same gender imbalance going for the 'cultural' concerts. "I like what they are doing with Sting," Davis pointed out. "It is not just a clash and they have singers."