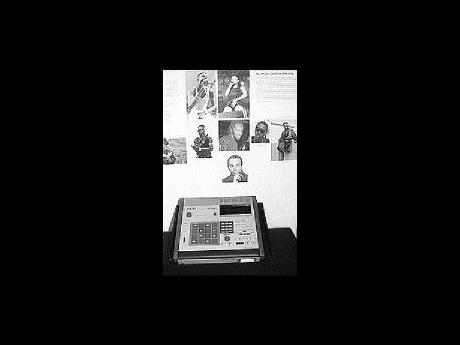 Dancehall is the final genre represented in the mini-exhibition. - Contributed

The last and latest Jamaican music genre in the mini-exhibition on Jamaican music is dancehall. It is written that "perhaps the most controversial and polarising genre of Jamaican music, dancehall, currently dominates the island's musical landscape".

While walking through with The Sunday Gleaner, Jamaica Music Museum director Herbie Miller said, "that's why a museum is so important. We are not just looking at the past. We are looking at the present and the future." At this dancehall stop, he points out to The Sunday Gleaner that many people did not like ska, which is now considered classic. Similarly, many people did not like reggae, which is now called the golden age of Jamaican music.

"Our duty as a museum is to collect it all, whether we like it or not. Let future scholars look at it and figure out what it means. Who knows? The world may develop in a way that what is seen as negative now will be seen as positive," Miller said, singing a few lines from Cole Porter's Anything Goes.

Miller stepped into the post last March, although the idea of a museum for Jamaica's music had been mulled for some time. He said Dermott Hussey has donated his entire collection - records, tapes (reel-to-reel, cassette), articles and letters included - to the museum. Along with other items, it will be stored at the Institute of Jamaica until the museum has its own physical space.

There is also a trombone which belonged to Don Drummond, donated by Rico Rodriguez, as a well as a trumpet that was owned by Johnny Moore.

Items may be donated or loaned to the museum. On a wall near the mini-exhibition is a print of the 'Catch a Fire' artwork by Ras Daniel Heartman, which had not been used, the original owned by Dr Brian Morgan.

Miller said among the things he wants to do is establish a virtual museum. While this will not replace the physical space, he notes that all museums have a cyberspace presence. "We live in an age where young people relate more to computer images than the physical artefacts," he said, noting the attendant accessibility.

He stresses the currency of the collection process of "that which will inform the future... Regardless of what Kartel and Mavado represent we have to collect it all". And Miller muses that in the end the good and the bad will find balance.

Visitors to the mini-exhibition have recorded their comments in the guest book. B Annak said it was 'educational', while Jacqueline Johnson said it was "quite informative". Jhenalie Dixon comments "with our rich musical history, I would have liked to see more legends like the Melody Makers, Rita Marley etc., NOT Vybz and Mavado. They are not yet legends. Maybe Beenie Man would have been a better choice. Grammy winners would be nice and captions under the names."