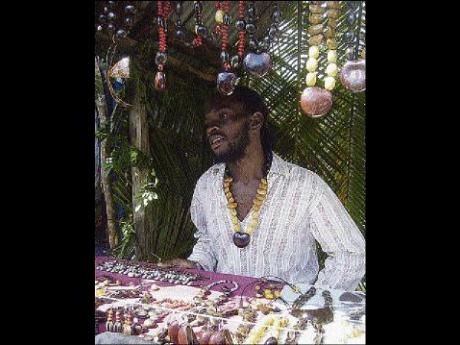 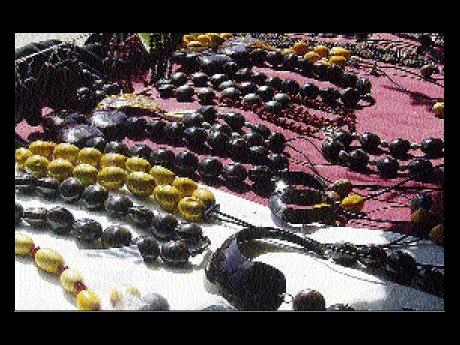 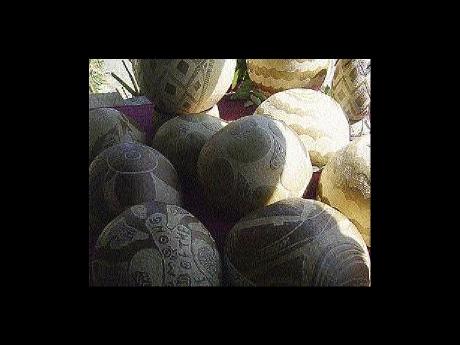 Tyshan Wright, president of the Full Maroon Council at Accompong Town, St Elizabeth, and owner of the Tabu brand of traditional Maroon ornaments and craft, at his booth at the 2010 Accompong Town Maroons' celebrations. Around his neck is one of his own creations.

One of the biggest ironies of the annual Accompong Town Maroons' celebrations over the last several years is the influx of vendors selling non-traditional and imported wares. This anomaly has been discussed and written about ad nauseam, but there seems to be no end in sight. This non-Maroon commercialisation of one of the biggest events on the heritage calendar has been putting dents into the efforts of those who are in the business of creating and selling traditional art and craft items and clothes.

Yet, the people who are into preserving the artistic heritage are not giving up and are holding their own at a time when the significance of the celebrations are greatly oversha-dowed by the need to earn a living. It is now being noised abroad and yard that, come next year, it will not be business as usual; that's a familiar tune, so only time will tell.

But for now, one person who is making sure that Maroon heritage is always on display at Accompong Town is Tyshan Wright, president of the Full Maroon Council at this historic Maroon village, perched on hills high in the St Elizabeth section of the Cockpit Country.

Since 2007, he has been producing and selling exquisite art and craft items and ornaments made purely of materials that are endemic to the region. He has been doing what his ancestors had done for centuries, albeit at a more sophisticated level. In an era which was considered backward, the Maroons used the natural environment to provide themselves with food, shelter and clothes. And to adorn themselves, they put together seeds and nuts that could be found in abundance in the area.

On Wednesday, January 6, during the 272nd celebrations, Wright's booth had a rich display of jewellery and craft items made only of materials found in the Cockpit Country.

"The inspiration behind all of it is that our culture has been basically dying off ... a part of me decided to see how best I can revive a part of our history," he told The Sunday Gleaner.

Naturally, he's not happy with the proliferation of non-indigenous goods in a place where his forbears fought for and won sovereignty.

"It is sad to know that other people tend to just ignore our culture and our history. We have a new colonel in place; we hope we can be able to change all this and display only our Maroon culture on the forefront," he said.

Wright's creations are marketed through the Tabu brand, and he said the feedback on his handiwork was positive.

"The reaction is very good. People congratulated me on what I am selling. They say it is very nice to see our culture on display, and are happy that someone is making sure the culture does not die out."

In terms of profitability, Wright might not be making a killing, but he said business had been getting better. He intends to expand and get the youths in the community involved in preserving their heritage while making a living. For, while making a living is essential, showcasing his culture is at the heart of his self-determination. Each piece of work means much to him.

"They are significant and remind me every day of the path that our ancestors paved for us," he declared.

Not far away from Wright's stall were many vendors selling foreign and locally made synthetic accessories. A quick observation showed that he was outnumbered, but not overshadowed. His pieces were striking and exotic, and he himself proudly wore his brand. Tyshan Wright is fighting to ensure that the preoccupations of those who have gone before him are carried on, and that's why he's this week's keeper of the heritage.

A collection of Tyshan Wright's necklaces all of which are made from natural seeds and dried nuts. - Photos by Paul H. Williams

Calabashes are versatile and were heavily used among the Maroons. The ones above are designed by Tyshan Wright, maker of traditional Maroon ornaments and craft.