MOVIE REVIEW: Denzel saves the world in 'Book of Eli' 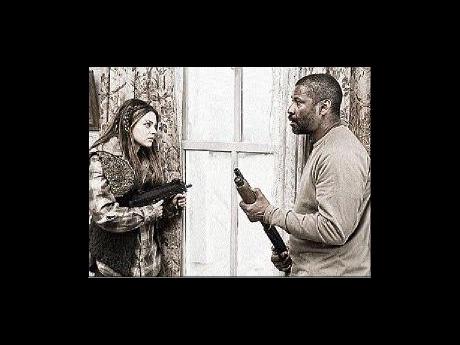 Mila Kunis and Denzel Washington star in 'The Book of Eli'. - Contributed

In the future, according to The Book of Eli, we will all dress like we are in a Nine Inch Nails video. It is written.

Most everyone wears goggles and leather in the post-apocalyptic wasteland of The Book of Eli. A meteorite and a subsequent war 30 years earlier have scorched the Earth and the population.

The landscape (shot in New Mexico) is much like an old Western: bandits (albeit cannibalising bandits) lurk the desert roads, while rough crowds take refuge in hardscrabble towns. At the downtown saloon, water, not whiskey, is 'the good stuff'.

Across this charred land strides our Christian cowboy, Eli (Denzel Washington), a mysterious, solitary man who carries the last remaining Bible in his backpack. He also carries a gleaming silver knife and a shotgun, both of which he is an expert with.

Like a prophet, he has heard God's voice in his head and he walks West with divine determination. He says to himself: "Stay on the path."

After 'the flash' of the cataclysm that rocked the Earth, many blamed the troubles on religion. All the books were burned, making the few that remain precious cargo indeed.

Those born after this event (and this might not seem so futuristic), have no knowledge of books, what they mean or how to read them. The elders are the exception, those who lived 'before'. Among them is Carnegie (Gary Oldman), a villainous man who presides over the town Eli wanders into.

He sends his minions out in search of a Bible, though all they can do is return with The Da Vinci Code - which apparently even meteorites cannot destroy. An intellectual (we first meet him reading a biography of Mussolini), Carnegie believes the Bible's power will make him a great leader: "It's a weapon," he says.

When Eli and Carnegie meet, much fighting ensues. A young woman, Solara (Mila Kunis, oddly fashionable in tattered clothes), gets roped into the fracas. Tom Waits makes a good cameo as a simple, somewhat quirky shopkeeper.

The Book of Eli is the first movie in nine years from Albert and Allen Hughes, the filmmaking brothers of From Hell and Menace II Society.

Post-apocalyptic tales are all the rage these days, and it is easy to see the imprint of Cormac McCarthy's far more deeply felt The Road, just recently adapted with disappointing results, on The Book of Eli. Like McCarthy's great novel, The Book of Eli follows a wandering man on a lawless road while carrying his charge (a boy, rather than a book, in The Road).

The Road even included an Eli: 'Ely', played by Robert Duvall in the movie. We might take both as a reference to the prophet Elijah, but The Book of Eli does not get too biblical, mostly content to spout a few cool-sounding verses before a battle.

The Hughes brothers let nary a bullet nor arrow fly without sending their cameras behind to track it in slow motion. That such a Christian-themed film enthrals in violence so much (the body count is in the dozens) is obviously contradictory to its message of civilisation saved by the Bible.

Blink and you will miss the only allusion to other religious tomes, a cheap, belated try at tolerance. One senses the Bible was chosen for The Book of Eli earnestly, but perhaps also to take advantage of its cultural weight. Such travails might not be plausible for one carrying the last copy of Moby Dick, or, for that matter, Jonas Brothers: Inside Their World.

Cinematographer Don Burgess has drained the film to a sepia. What breathes life into The Book of Eli is the performances, most notably by Washington and Oldman.

It is fun to see Oldman, made relatively boring in the Batman films, return to full, theatrical villain mode. He is not over-the-top as he was in The Professional but rather a rational, intelligent survivor: a frustrated dictator. He wants order, only he wants to control it.

Washington, too, is in his wheelhouse. Ever able to play a man with purpose, he propels the film on a straightforward, linear path: a charismatic man of few words with a whole lot of them in his sack.

The Book of Eli, a Warner Bros release, is rated R for some brutal violence and language. Running time: 118 minutes. Two stars out of four.